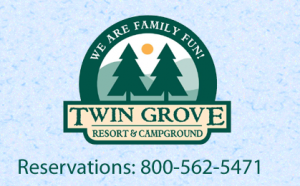 The owner of a Lebanon County, Pa., resort and campground hopes to spark a feeling of nostalgia while raising money for a local charity.

When Twin Grove Resort and Campground owner Philip Moreau, Carmel, Calif., bought the resort on Route 443 just outside Pine Grove, Pa., in July 2008, there was a bonus that went along with it — seven airplanes used in a 1930s-era amusement park ride.

“We found them in a Lebanon warehouse covered over with inches of dust,” Moreau told the Pottsville Republican.

He said he knew immediately he needed to get the planes out into the public eye.

“In its heyday, Twin Grove was a place for working people and their families to enjoy themselves on Saturday and Sunday afternoons,” Moreau said. “There was a pool, penny arcade and, of course, rides.”

Moreau said the former resort owner found the planes covered with a tarp and wasting away on a hillside on the property.

The former owner planned to restore the plane ride to working condition – a perfect addition to the 1950s Allan Herschell carousel and Garbrick Ferris wheel campers were already enjoying.

“He built a 10-foot square solid concrete slab and a 75-foot tower to hold the ride and began restoring the planes,” Moreau said. “The National Amusement Park Historical Association was thrilled, but the state regulators were not. They really came down on him on a number of safety issues, one thing after another. It became cost prohibitive to get the ride going, so he gave it up.”

When Moreau found the planes in the warehouse, he thought they were “cooler than can be,” and decided to restore the planes to be used as show pieces around the campgrounds, a symbol of Twin Grove’s past.

A.J. McIlvaine, 18, of Fairfax, Va., is working as a summer intern at Twin Grove and has become a plane ride restoration specialist of sorts. He has researched the amusement park ride and, by using spare parts and his imagination, is bringing each plane back to its former glory.

“I originally thought I could make three really good-looking planes, but after really looking at the inventory, I realized I could make seven,” McIlvaine said.

He got to work on the project a few weeks ago, facing some challenges along the way.

“Some of the seat cushions were actually from completely different rides, so I had to take them apart and reframe them,” he said. “I also had to create three ‘engines’ to support the propellers which I made from paint cans and copper pipe.”

McIlvaine’s Eagle Scout background came into play numerous times as he thought up different ways to make the supplies he had fit the project.

Moreau said the work should be complete in a month and an auction of one of the planes will be held Labor Day weekend.

“We are looking for an area charity to donate all the proceeds of the auction to,” Moreau said. “The community has always been supportive of us and we would like to help by making this donation.”

Any groups wishing to be considered as beneficiary of the proceeds should contact McIlvaine at (703) 939-5520, or by e-mail at [email protected]

Moreau said he is hoping the remaining planes will enhance the 100-acre grounds, which include tent and RV sites as well as four yurts and several cabins and cottages, as well as a restaurant, ice cream parlor, band stand, pool, arcade and movie theater.

The site also strikes up some memories in area residents.

“When I was a little girl growing up in Lebanon, Twin Grove was my Hersheypark,” said Diane Thornton, Pine Grove, resort activities director. “This was always a destination park, very family-oriented and it has remained that way.

“The airplanes remind me of the old Twin Grove, which is very special to me. My parents met here. We came here every weekend. I rode in those very planes. They were a part of my childhood.”

Thornton said she is not alone in her memories.

“I listen to all the locals talk about the old days when they visit,” she said. “Everyone is going to love seeing those planes.”