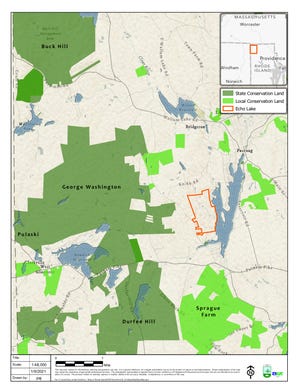 The outlined portion shows the Echo Lake Campground, which the state of Rhode Island purchased.

The Rhode Island Department of Environmental Management (DEM) has bought the former Echo Lake Campground, 235 acres that includes a 2,200-foot stretch fronting Echo Lake in Burrillville, according to The Providence Journal.

The DEM announced the $2-million purchase on Friday (Jan. 8), saying the campground’s location on the large freshwater lake also known as Pascoag Reservoir makes it a key recreational asset for the state.

The agency will continue to use the property for camping and is working on a plan with the Town of Burrillville.