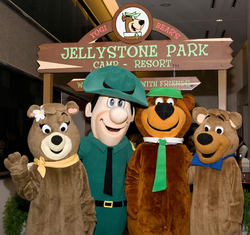 Ever since the Moubray family purchased River Bottom Farms RV Resort & Campground four years ago, they have built the 43-acre park on the North Edisto River into a successful business that draws clientele not only from the Carolinas, but from around the world, according to a news release.

“It’s amazing what the Internet has done for the camping industry,” said Susan Moubray, who runs the park with her husband, Jim, and daughter, Dana Gabriel. “We’ve had people from Israel, Ireland Switzerland. We ask them, ‘How on Earth did you end up at River Bottom Farms?’ And they say, ‘We wanted to see the real America.’”

But after April 1, the 70-site park is likely to gather even more attention from camping enthusiasts. That’s when the park officially becomes the first in South Carolina to join the Yogi Bear’s Jellystone Park Camp-Resort chain, the second largest campground chain in the country.

“We’re excited,” Dana Gabriel said. “The name recognition will help put us on the map and help us draw business we haven’t been able to capture before.”

Joining a nationally known campground chain will also help the family team as they increasingly target their marketing to families in the Carolinas and across the country, many of whom have yet to discover that camping is America’s most affordable vacation option.

“You can go to a Brave’s game in Atlanta with a family of four for four hours and it will cost you more than if you went camping for a whole weekend,” Moubray said, adding that parents need to do more to get their children into the Great Outdoors “so they’re not just exercising their thumbs.”

River Bottom Farms is known for the many family-friendly activities it provides, including fishing tournaments in the park’s five stocked fishing ponds. “Last year,” Moubray said, “a lady won the fishing tournament we had on Father’s Day. That killed the dads!”

The park also offers nature walks and scavenger hunts. “We’ll give the kids pages and turn them loose to go find different types of bugs, leaves and moss. We have 12 different varieties of ferns here, as well as oaks and maples. We also have Mexican petunias. The children can pick every flower off of that plant and the next day it will bloom again with 100 flowers.”

Moubray and Gabriel also like campfire games. “We’ll have the children sit with their families in a circle and one person will start to tell a story, then the next person will add to it and the next person adds to it. It’s a continuous narrative with twists and turns and everyone breaks out laughing,” Moubray said.

Of course, all these activities now have an extra element of fun with Yogi Bear participating. Yogi will be on site daily to greet campers, pose for photo ops and take part in events.

All of these fun and games are a big change for Susan Moubray and Dana Gabriel, who previously worked together for many years as interior designers until Moubray decided she needed a career change. She initially toyed with the idea of opening a bed and breakfast inn, but she later decided she would rather get involved with a business that involved families with children.

“I just think the campground industry as a whole is so family-oriented, whereas the bed and breakfast industry isn’t,” she said. “In a campground, children can run, fly a kite, and scream at the top of their lungs and people will love it.”

Gabriel, for her part, joined her mother and stepfather with what she calls her mom’s “latest business adventure” because she liked the idea of being involved in a business that helps promote family bonding and great memories. “Now,” she said, “I get to sell an experience that will make a great memory to last a lifetime instead of a product people will be tired of in a few years. I find that much more satisfying.”