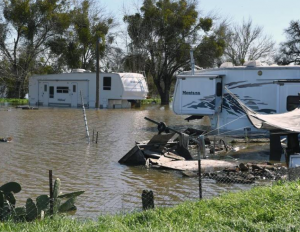 Jasmine Trybom and several other people at Catfish Camp RV Park packed as much as they could and moved their units to higher ground before the San Joaquin River spilled over its banks early Sunday (Feb. 12) in Crows Landing, Calif, the Modesto Bee reported.

Other people weren’t able to move their trailers in time. The river, which is expected to continue to rise, flooded their RVs and ruined a lot of their belongings.

Stanislaus County sheriff’s deputies and county Office of Emergency Services officials over the weekend had spoken to residents at Catfish Camp, strongly recommending that they move their RVs to higher ground, according to sheriff’s spokesman Sgt. Anthony Bejaran.

He said the residents were not forced to evacuate the RV park, but they were warned that the river would continue to rise and likely flood the park. Bejaran said authorities suggested that the residents move their belongings and vehicles out of harm’s way.

Lori Taylor has worked as a manager at Catfish Camp for the past two years. She said an official from a local fire department warned her Saturday that the river would continue to rise and that water pumps at the RV park weren’t going to make any difference once flooding started.

“He didn’t say, ‘You guys have to leave,’ ” Taylor said. “Not everyone has the means to leave.”

So, several stayed at the RV park until it was too late. Taylor left behind her son’s white Pontiac sedan surrounded Sunday by floodwater.

Bejaran said Catfish Camp residents were warned 36 hours before the water flooded the RV park. He said residents at Fisherman’s Bend RV park on River Road in Newman received the same kind of warning 72 hours before it was flooded.