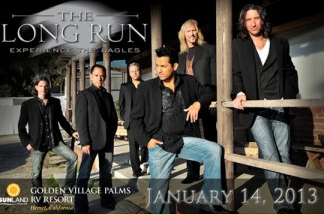 When Tracie Rodgers began work as an events director at the Golden Village Palms RV Resort in Hemet, Calif., a dozen years ago, she scheduled performances of 1930s and 1940s music for her senior guests.

It was the sort of big-band music she only had heard in Bugs Bunny cartoons.

Times changed. Rock ‘n Roll didn’t die. It lives on at RV spaces, around pools and during concerts in the Hemet resort, a prime habitat for fun-loving baby-retirees, the Riverside Press-Enterprise reported.

Tickets sold out for a show today (Jan. 14) by The Long Run, an Eagles tribute band. Holding a weeknight concert is not a problem. Every night is like a weekend at Golden Village.

Many of the retiree RVers are around the age of the Eagles, a band that still can fill arenas, or even younger. Glenn Frey, one of the founding members of the Eagles that will be honored Monday by the tribute band, is 64. Don Henley, another original, is 65.

Golden Village is proving to be popular with retirees from the Baby-Boom rock generation born following World War II.

In an ongoing renovation effort, Golden Village has been transformed from a typical travel park with shuffleboard and bingo as prime activities. While a deluxe tournament shuffleboard hall still is used, Golden Village now features a stylish fitness-center club house, a resort-like pool area, beach volleyball and lots of palms.

Despite the sour economy, the park, which has more than 1,000 spaces, still attracts active, sun-seeking retirees to Hemet. In the winter, about 60% are from Canada. Occupancy peaks in February, when nearly 90% of the spaces likely will fill.

Today’s Golden Village visitors tend to participate in beach volleyball and trendy Zumba fitness classes. They play the region’s golf courses and rock out at concerts.

Monday through Saturday, from 11 a.m. to 2 p.m., weather permitting, local musicians play poolside and restaurants from the Hemet area bring in food for sale. It’s a pool party.

Later, around 3 p.m., happy-hour gatherings start when beach chairs are snapped open at motorhomes. When a reporter drove through Golden Village on Tuesday, a beautiful, sunny day, guests in bathing suits sunned around the pools and by their motor homes. People rode beach-cruiser bikes all over the park. Many congregated at a weekly Tuesday Farmers Market, where they bought fresh vegetables.

“The hardest decision they make all day is where happy hour will be and what they will bring,” Rodgers said.

Christine and Jaime Tate, both longtime Hemet residents, fell right into the Golden Village lifestyle after they sold their cruising sailboat and bought a motorhome.

Christine Tate operated her popular Rainbow Lady women’s clothing store for 31 years and Jaime Tate headed Tate Investment Properties. They left their businesses in 2005 to sail the waters of Mexico and the South Pacific before returning to California.

They gave up their liveaboard lifestyle for a motorhome. They found they liked Golden Village so much that they continue to rent their nice house in Valle Vista while using the park as a base for their travels. Christine Tate said they would have moved to Golden Village earlier if they had realized how nice and fun it was.

“We really like it,” Christine Tate said. “We don’t do the shuffleboard thing. We use the pool and the weight room.”

They look forward to the Garrett Wilken and the Parrotheads Jimmy Buffett tribute concert. She said the park has plenty of Parrot Heads, the term for fans of the partying, Caribbean-influenced rocker from Key West.

She said rock music played around motor homes, at concerts and at the pool area is the norm.

“The people here are younger in age. At least we think we are.”