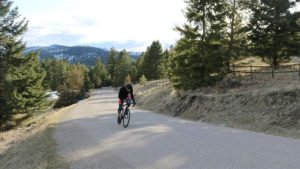 Dan McAllister climbs a hill in Lone Pine State Park in Montana. McAllister is one of many who have moved to Flathead County, Mont., recently to take advantage of year-round recreational opportunities.

Editor’s Note: This article appeared on The Pew Charitable Trust’s website and was written by Jen Fifield.

It’s a Monday evening and Dan McAllister is charging up a mountain in Lone Pine State Park under a canopy of Douglas fir.

He keeps his head down and his bike tires whizzing until he gets to the top, where he can see across the Flathead Valley in northwest Montana. To the north are the snowcapped vistas of Glacier National Park and to the south is the glimmering head of Flathead Lake, one of the largest natural freshwater lakes west of the Mississippi.

McAllister, 33, moved here two years ago from Missouri so these could be his everyday views.

He’s not the only one. Every year, more people are moving to small towns tucked in the Flathead Valley so they can choose from a range of outdoor activities — camping, hiking, riding their bikes, even kayaking or skiing — throughout the year. Flathead County first hit 100,000 residents last year, after growing by about 10 percent since 2010, according to U.S. census estimates. It’s the state’s second-fastest growing county, after Gallatin County, home of Montana State University, and one of the fastest-growing rural counties with populations over 25,000 in the United States.

While many rural counties have been shrinking for years, others with strong recreational industries, such as mountainous western towns where people can take a quick hike or southern states with year-round golfing weather, have been growing rapidly. These populations are growing as it becomes easier to work from anywhere, and as more people retire and move away from the city.

The trend is part of what drove the overall slight growth of the rural population in the United States from 2016 to 2017, for the first time since 2010, according to a Statelineanalysis of census data. (Rural counties are those defined by the U.S. Office of Management and Budget as outside cities and their suburbs.) The population in rural counties grew by only about 33,000 during that time, to about 46 million.