By: Woodall's Campground Management|Published on: May 11, 2017|Categories: Industry News| 0 comments 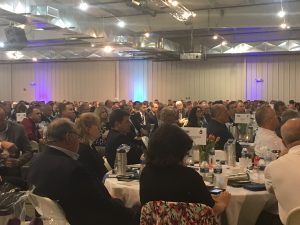 A crowd of more than 850 RV industry personnel gathered together for the RV Industry Power Breakfast.

The throngs began arriving just before sunup today (May 11), filling the RV/MH Hall of Fame’s Northern Indiana Event Center in Elkhart, Ind., to capacity for the fifth edition of the RV Industry Power Breakfast — an event that has evolved into an integral cog on the industry’s trade show circuit.

Eclipsing last year’s attendance high mark, the event drew more than 850 people to get a wide-ranging, information-laden format with details from key leaders in the Recreation Vehicle Industry Association, RV dealers, suppliers and manufacturers and officials from the local, state and national level. 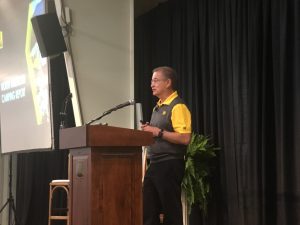 Gast noted that over the last three years of research of the North American camping market — the full market, not just KOA campers — there are 3.4 million new camping families, according to research group Cairn Consulting.

The demographics are shifting, too. Once a Boomer-focused market, Baby Boomers only represent 21% of campers now, and mature campers are another 7%. Generation X takes up 34% of the camping market, and Millennials are the largest single segment with 38%.

Other findings include:
• In 2012, research showed that 88% of campers were white, while in 2016, only 74% of campers were white.
• Younger campers are renting RVs in large numbers, Gast told the audience, with 38% of Millennial campers wanting to rent an RV before tehy buy, and 32% of GenXers saying the same.

Gast encouraged the RV manufacturers to focus on families. “We need many more affordable options for young families,” he said.

He also said that while toy haulers serve one market niche well, there’s another potential market for units that carry smaller toys. “The younger generation wants their bikes and their kayaks, and there aren’t a lot of units out there with a built-in option,” he noted.

In all, the market outlook is good, Gast said. “There’s more campers out there than we’ve ever seen before, and they’re camping more frequently.”

Gast closed his presentation closed by calling up KOA Care Camps Board President Wade Elliott, who received a $4,500 donation for the charity from Sherman Goldenberg on behalf of event facilitator RVBusiness and its sister publication, Woodall’s Campground Management.

For more details about the event from RVBusiness, click here.