RV Industry Power Breakfast Rescheduled for Next May 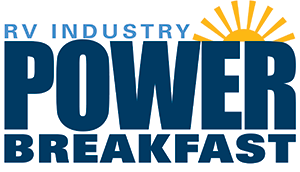 The organizing committee for the RV Industry Power Breakfast has decided to cancel this year’s annual breakfast, which had been scheduled for Dec. 3 at the RV/MH Hall of Fame/Northern Indiana Event Center in Elkhart, Ind.

The decision to pass on this year’s breakfast, which is facilitated by RVBusiness (RVB) magazine, sister publication to WOODALLSCM.com, and BJ Thompson Associates, followed a two-month debate among the organizers of the popular event, RVB spokesmen reported in a joint statement released today (Oct. 16).

“This announcement probably doesn’t come as a big surprise, given the headlines we’ve all been seeing lately in the regional and national press, and obviously results from the current difficulties everyone faces in holding large gatherings in Indiana and elsewhere due to the ongoing pandemic,” said RVB Chief Revenue Officer Gregg Fore. “It also has to do with our earnest concern for the health and welfare of potential attendees.”

As a result, the organizing committee is currently focusing on the 2021 breakfast, now set for the Hall of Fame’s new Peter B. Orthwein Pavilion on the morning of Thursday, May 13, the same day the Hall of Fame holds its annual induction dinner.

“In so doing,” added RVB Publisher Sherm Goldenberg, “we’ll hopefully continue to build on the reputation that the breakfast has cultivated over the past seven years as a bellwether event for the industry in general that typically draws as many as a thousand RV industry, civic and governmental representatives.”