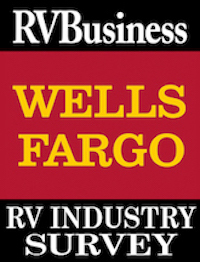 Despite last year’s pandemic challenges, fully 75% of the 203 respondents to January’s all-industry RVB/Wells Fargo Survey posted growth in 2020. RVBusiness is the sister publication to WOODALLSCM.com.

In fact, businesses operated by 42% of those responding to the annual poll grew by more than 20% last year, thanks in large part to a surge in retail demand following an unprecedented, pandemic-related spring shutdown. That surge enabled the industry to exceed expectations with many Americans turning to RV’s as a means of escaping the confines of their everyday lives.

“Here again, we can’t overstate the absolute surprise the whole industry has experienced, as reflected by these survey responses confirming last year’s substantial growth,” stated RVBusiness Publisher Sherm Goldenberg. “I mean, it’s impossible to have imagined that the silence last spring that settled across the U.S. economy and the American RV industry due to the unilateral shutdown would be followed by this kind of a positive outcome.

“Having said that, we fully realize that it’s no time to spike the football, so to speak, because the impacts of last year’s viral outbreak are still very much a factor in our daily lives and business prospects. So, we’ll just take the good news for what it is and move on.”

Here’s some more highlights from this year’s RVB/Wells Fargo Survey, which will be published in full in the March/April issue of RVBusiness:

Meanwhile, 54% of the respondents say they’re looking for “a robust year of continued growth” in 2021 if, according to the survey’s frank essay responses, the industry can adequately manage supply chain issues, retail inventory levels, product quality, labor shortages, campground capacities as well as the service-and-repair side of the business for new and existing owners.

“We feel that 2021 will be a great year for RV sales,” said one survey participant, reflecting a common theme. “We’re starting off much stronger than previous years and product availability is slowly returning. Financing is still reasonable and available.”

“We feel that this year will be a year still driven by customer demand but largely affected by limited supply,” said another respondent. “It will take another year at this pace to even begin to get the pipeline filled back up with inventory. Units are coming in but heading back out on much quicker turns which doesn’t allow us to build stock on the sales lot.”

“2021 is already showing dramatic signs of strength in the market,” added a dealer. “Last year at this point in January we had three sold units that hadn’t yet been delivered. Today we have 43 already sold in January waiting to be delivered and another 26 sold units on order.”