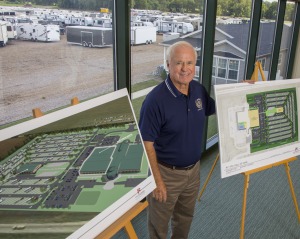 He said, the campaign, ultimately totaling as much as $10 million, should help launch the first two of three proposed expansion phases designed to augment rental facilities for both businesses and the many social events – weddings and other private affairs – for which the facility has seen a growing demand in recent years.

The current 10-year-old building’s footprint is about 60,000 square feet — including its museum, library and Go RVing exhibits – and about 85,000 square feet with the upstairs offices.

The idea of expanding the unique facility, which Searer first presented as a concept to his board about two years ago “as the vision for the future of the Hall of Fame,” received an affirmative nod of approval from the general public and other stakeholders in a $50,000 study completed recently by Johnson Consulting and Development Concepts Inc., on behalf of Elkhart County’s Redevelopment Commission.

An expanded facility could garner as much as $2 million a year in revenue, while drawing as many as 250,000 people annually for events, concluded the study, results of which were released in early August.

“It’s (the fund-raising campaign) got to start this year while things are good economically,” said Searer. “So, we have to start applying to the different foundations. A number of the foundations have already given to the facility that’s here now, but I can’t imagine that with this vision that there is anybody in the RV industry that wouldn’t say ‘yes’ to supporting the next phase of expansion.”

Key elements of the three-phase plan:

Phase I: An all-new 300-site RV rally ground with available power, dump stations and water on the east side of the HOF’s 40-acre property, plus a 20,000-square-foot pavilion with large roll-up doors featuring a stage on one end and restrooms on the other.

Phase II: A 60,000-square-foot event center addition accommodating as many as 3,500 people for a sit-down dinner, as well as smaller events when utilizing sound-proof, drop-down walls that can subdivide the facility into three separate 20,000-square-foot halls.

Phase III: A reconfiguration of the facility’s existing 18,000-square-foot Ingram Hall, creating a smaller, chandelier-equipped banquet hall seating closer to 150 vs. the 950 that it accommodates today, plus a 7,000-square-foot expansion of the adjoining RV museum in addition to space set aside for meeting rooms and, potentially, office rentals.

True to form, however, Searer promises that nothing will occur until the money’s in hand for the Heritage Foundation, which has posted a dramatic financial turnaround under the guiding hand of Searer, a part-owner of Elkhart-based Ultra-Fab Products Inc., who has made the HOF a personal mission in recent years.

In fact, Searer predicts that the HOF — its debt down from $5.5 million to $550,000 over the past five years — should be debt-free next year. “We will raise the money. It will be in the bank before we move the first shovelful of dirt,” he said, adding that the fundraising effort and the resultant construction project may well be completed in phases as the money becomes available.

All other considerations aside, Searer maintains there’s a bonafide need for a larger Elkhart rental facility in the greater Elkhart zone.

“There’s an old saying, ‘You either grow or you die,’” he said, “and the fact is that we kept track for a year of all of the events that we could not hold here because (A) we didn’t have a large enough space or (B) we didn’t have multiple spaces to handle simultaneous events. And the amount totaled $150,000 that we had to pass on.

When you start looking at the (Elkhart and Goshen) Boys and Girls Club, and you start looking at the RV Industry Power Breakfast, which was sold out the last two years, you soon realize that if we don’t grow to take care of that clientele — and the county will support it — then somebody else is going to do it. And we have 40 acres that we can develop.”