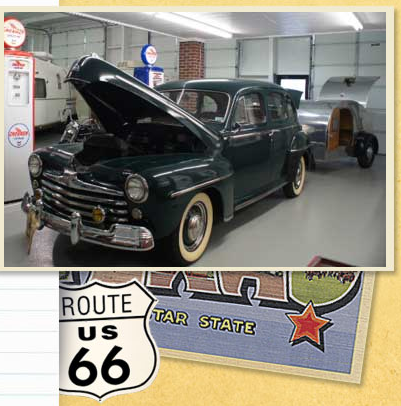 They rumble through the Texas Panhandle by the thousands to get to New Mexico and Colorado, and now, recreational vehicles have their own museum, right off Interstate 27.

Jack Sisemore and his son, Trent, opened the RV Museum this spring behind their Amarillo, Texas, RV dealership, Sisemore Traveland, at 4341 Canyon Drive. It showcases RVs they have bought and lovingly restored over the years, just because they wanted to. The museum’s free, and they won’t even try to talk you into buying an RV while you’re there, the Austin American-Statesman reported

Inside a 6,000-square-foot metal building, the RVs are staged with picnic tables and other camping paraphernalia, so that the museum has the surreal feel of an overnight trailer park — but with air conditioning.

“We’ve been restoring RVs for about 25 years,” Trent Sisemore, a former two-term Amarillo mayor, says. “We just love doing it.”

Most of these campers, trailers and motorhomes are so beautifully restored that they actually gleam, though a few have been intentionally left in the condition in which they were found (although they’ve been cleaned). About 15 of the Sisemores’ 25 vintage RVs are on display at any time.

The first RV you see when you walk in is a 1948 Flxible bus used in the 2006 Robin Williams movie “RV,” which plays in a constant loop on a TV screen near the long red-and-white bus that Trent Sisemore hunted down in a Hollywood studio.

Nearby is a 1953 Fleetwood that the Sisemores found in bad shape at a gas station 15 years ago. It took two years to restore, they say. A cute little 1936 Alma trailer had been sitting in a barn since 1955 until the Sisemores recently found and restored it. There’s also a 1937 Kozy Kamp tent trailer, one of the first built.

With the exception of a 1937 Elkhart Traveler, the Sisemores recently acquired, all the RVs have steps at their doors, and you’re welcome to go inside and look around. Each is staged with appropriate kitchen gadgets, books, games and other knickknacks from its period.

A 1975 Itasca — in mint condition with only about 6,000 miles on it — reminded me of the RV my parents bought after my father retired. My kids and I took a lot of trips in that one.

A 1946 Kit Manufacturing aluminum teardrop trailer is a real charmer. It’s small but efficient, with a mattress inside the trailer and a kitchen in its “trunk.” The trailer was built with Army surplus aluminum after World War II.

The RV Museum has picked up a lot of buzz among RVers, and on the day I visited, there were about a dozen people there, wandering around fairly reverentially, talking softly about their own RV experiences.

Along with RVs, the museum displays about a dozen vintage motorcycles, because Jack Sisemore loves motorcycles. His favorite is a 1952 Blue Harley.

“My father had one like it, and he gave it to my brother, who rode it all through high school,” he says.

A replica gas station in the museum is a tribute to Jack Sisemore’s career. With money he borrowed from his grandmother, he opened a Chevron station in 1963. In the ’70s, he wanted to travel with his family, so he rented an RV. He later started renting RVs to other people, and that eventually led to the opening of his own RV dealership. Now, the family’s involved in RV manufacturing as well.

Oddly, the Sisemores still find time to vacation in RVs themselves.

“I leave here usually the last Saturday in September, and I’m gone for three to 3 1/2 weeks to Maine,” Jack Sisemore says. “That’s where the majority of these things have come from. We go junkin’, I call it.”

Find out more about the RV Museum at www.RVmuseum.net.