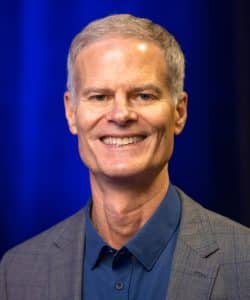 There’s no question that many of us initially approached the 2022 Elkhart RV Open House with some trepidation because of the headwinds – and headlines – this industry and the U.S. economy have experienced lately.

Throw in the surprising fall-like weather we all wound up facing this week (Sept. 26-29), with cold winds and incessant light rains, and it would have been easy to assume the worst.

Having chatted with a lot of industry people over the last three days around the RV/MH Hall of Fame and elsewhere around the northern Indiana RV-building hub of Elkhart County – including manufacturers, suppliers and dealers – I’ve just got to make an observation: That the cultural and strategic infrastructure around which this industry was built is in solid shape.

“We’ll need to wait a bit for final conclusions,” RV Industry Association (RVIA) President Craig Kirby told WOODALLSCM.com (WCM) Wednesday (Sept. 28) while strolling around Forest River Inc.’s busy new west-side exhibit. “But I just think the turnout’s been phenomenal. There’s a lot of great energy in all the booths. The dealers seem in good spirits and it’s what makes this industry unique and how everybody comes together and works so well together. And it’s been a very positive event, despite the negativity you hear in the national news pages regarding the general economy, I think we’re hearing a lot of positive thoughts from almost everybody involved in this industry.

“Frankly, I think this event is showing how the industry has matured when we’re forecasting a number of over approximately 419,000 units next year when we’re right in the middle of these economic headwinds with interest rates going up and skyrocketing and the kind of issues that we’re facing nationally and globally,” added Kirby. “I think that says a lot of positive things about the industry.”

“I’ve been speaking over the last couple of days – just going through the show with small suppliers and the big ones everyone knows like Dometic, Thetford, Winegard and Roadmaster,” said Searer, who oversees the Hall of Fame’s annual supplier show, which grew this year to a record 197 supplier booths. “And what they’re all saying to me is, they’re very pleased with the traffic – that even if there was a little less traffic this year as many of us noticed, the quality of the people that came into their booth is better than ever. I think that speaks for itself. And they’re saying, Can we sign up to make sure we get the same spot next year?”

All things considered, though, my main takeaway was the surprising consistency of the dealer comments at the show, which appears to have drawn a who’s who of North American RV retailers.

“I think that business is still really strong,” said Brett Parris, owner of Brett Parris RV, a four-store operation based in Salt Lake County, Utah. “I think business is good. I just believe that dealers as a whole have too much inventory on the ground, and we just need to work through some of the current inventory, and that’d be it.

“But as a company, I can tell you, everything’s great,” he added. “We sell a lot of RVs, and I think we do a really good job.”

Also taking the high road was Ron Shepherd, a former RVDA chairman with Camperland of Oklahoma which has stores in Tulsa and Sapulpa, Okla. “We are actually doing really well,” said Shepherd “We’re having another good year – not as good as ’21, but another good year – probably comparable to 2019, maybe a little ahead of 2019. But we feel very fortunate to be where we’re at.

“Of course, the prices of things have obviously changed the dynamics on the finance side because we’ve had to increase flooring like everybody else, paying so much more these days so you’re being very selective about what you’re going to stock and not stock.”