RV Park to Be Part of City's Gateway Project 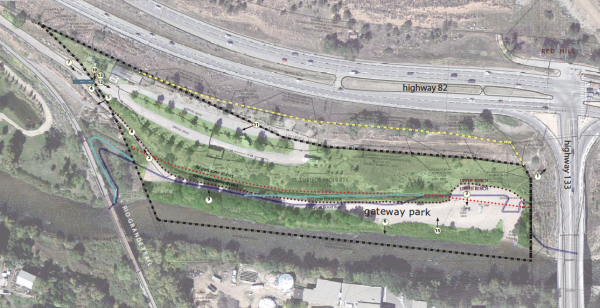 Aerial view of the proposed site for Gateway River Park near Carbondale in western Colorado.

The plan was presented to the board of trustees on Tuesday (Dec. 18), and is headed for another hearing before the Parks and Recreation Commission on Jan. 9, according to recreation director Jeff Jackel.

Jackel said the price tag for the park is a rough estimate at this point, and “could go up, or could go down” depending on how much work is done, the Post Independent, Glenwood Springs, reported.

The plan calls for a variety of improvements to the seven-acre park at the southwestern corner of the Highway 82 and 133 intersection. In recent years it has been the site of a private RV park, and is one of the most intensively used boat ramps in Colorado, according to Colorado Parks and Wildlife.

The plan calls for a natural trail that leads eastward under the Highway 133 bridge, which planners hope will ultimately link to a bicycle and pedestrian bridge spanning the river and connecting the park to Carbondale proper, and perhaps to the Red Hill Recreation Area to the north, across Highway 82. Another path will link the park to the nearby Rio Grande Trail.

Amenities also include a campground with 20 spaces for RVs and six tent-camping spots, and a building with restrooms and showers that will serve the campground and the boat launch area.

A Welcome Center is planned for the entry to the park, at the western edge of the park, alongside the access road from Highway 82.

The town has owned the park for two years, since buying it for $2.5 million from Stan and Valerie Koziel in December 2010, and officials have been talking about the improvements ever since.

The planning process started last summer, when the town hired the Bluegreen design firm and Sopris Engineering and appointed an 18-member steering committee.

“We’re just using this plan as a way to guide us,” Jackel said.

Before the actual construction work can begin, Jackel said, the town needs to find a way to pay for it.

“The whole scope of the project over 15 years will be driven by the town’s ability to get grants,” he said. Prospects include Great Outdoors Colorado (GOCO), the county’s Federal Mineral Lease District funding pool and other sources.

At the work session Tuesday, trustees offered a positive reaction to the plan, which is spelled out in a 55-page illustrated document. Trustees John Hoffmann and John Foulkrod have served as trustee liaisons on the steering committee.

“They liked the fact that it was a 15-year plan,” said town manager Jay Harrington. He said the trustees appreciated having as much time as possible to search out funding options.

“They embraced it more than I thought they would,” Harrington said. The Parks and Recreation Commission is expected to give the plan its final approval and send it back to the trustees for adoption in January, Harrington said.