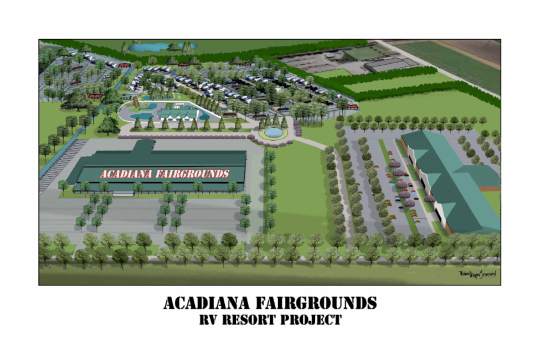 Artist’s rendering of the Acadiana Fairgrounds near New Iberia, La., where an expanded RV park is planed. Ground was broken Nov. 30 for the project. Opening is anticipated in April.

A state-of-the-art RV park planned a stone’s throw from the city limits of New Iberia, La., is scheduled to open in April.

The “Cajun RVera” will include more than 200 sites for recreational vehicles. It will also include a country club-style clubhouse; 9,000 square feet of pools and water features, such as a splash pad; a beach volleyball court; an arcade; washeteria; horseshoes; miniature golf; a pond; and smaller chalet-style cabins.

The commission held a groundbreaking ceremony Nov. 30 to mark the beginning of the project’s construction. The second phase of construction will include an expansion of RV sites to about 400 and the addition of a pond surrounded with more cabins.

“All this is without a dedicated tax,” Vincent said.

The project is funded by the commission’s sale of $5 million in bonds and a $250,000 grant from BP, Vincent said.

The RV park is located behind the SugArena Acadiana Fairgrounds, a show barn and festival fairgrounds. The fairgrounds are on La. 3212, adjacent to an industrial park and inside a tax increment financing district or TIF. 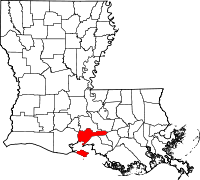 Iberia Parish in Louisiana is marked in red. Map courtesy of Wikipedia.

The special taxing districts are used to help spur development because tax revenue generated by a new development is used to pay back the money used to build the development or the infrastructure needed to attract it.

The RV park project has received about $160,000 in TIF-generated funds from the parish to help with sewage infrastructure and soon, the commission will request about $250,000 more from the Iberia Parish Council for water infrastructure, Vincent said.

The commission was created in 1999 and charged with managing the fairgrounds, which has since grown to include 130 acres of property, Vincent said.

Every weekend, some equestrian, livestock or other event is booked at the site, said Tim Guidry, the arena’s director. He said there are about 100 RV hook-ups for utilities at the SugArena, but having an established park will help attract more tourists and event opportunities.

Vincent said net revenues from the park’s first year in operation are estimated to be between $880,000 and $1.2 million.

Revenues will be used to construct an adjacent civic center for the parish, Vincent said.

“Our vision is not to have to go to taxpayers for this,” he said and pointed to the civic center on an enlarged artist rendering of the planned development of the fairgrounds site.

Vincent said he expects the park to attract more regional RVers in Acadiana than tourists from afar.

With the economy, more people are choosing to vacation closer to home, Vincent said.

“People don’t go far away, but they go more often,” he said. “We want to provide them a country club RV atmosphere.”