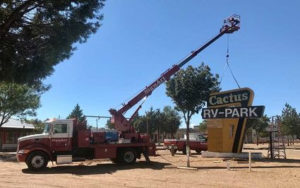 Workers from SignArt in Albuquerque, N.M., on Thursday (Oct. 25) afternoon prepare to remove a 1950s-era neon sign from the Cactus RV Park in Tucumcari.

Workers on Thursday (Oct. 25) afternoon dismantled and hauled away a 1950s-era neon sign from the Cactus RV Park in Tucumcari, N.M., after a collector from Albuquerque purchased it, according to the Quay County Sun.

It was the second time in less than a year a vintage neon sign along Route 66 in Tucumcari was taken away. In February, a sign collector in Wisconsin bought the Paradise Motel sign on the town’s west end after the long-abandoned property suffered its second suspicious fire in less than six months.

A prominent Route 66 advocate in New Mexico called the disappearance of neon signs in Tucumcari and elsewhere on the historic road alarming and has proposed an idea to do something about it.

Andy and Sue Patel, who have owned the Cactus at 1316 E. Tucumcari Blvd. for nearly 40 years, have been selling off many belongings in recent weeks in anticipation of selling the property. Andy Patel said they’ve been negotiating with the O’Reilly Auto Parts chain, based in Springfield, Miss., and hope to have the deal closed as early as this week. The business will continue operating until that happens.

The Cactus RV Park, formerly the Cactus Court and Cactus Motor Lodge, opened in the late 1930s and is listed on the National Register of Historic Places. The Cactus also remains one of the few surviving properties in Tucumcari listed in the Negro Motorist Green Book. The travel guide, published annually from the 1930s to the 1960s, helped African-American travelers find businesses that would accommodate them during the Jim Crow segregationist era.

The motel part of the Cactus closed in the 1990s and the Patels converted the grounds into an RV park.

Patel said he didn’t want to part with the Cactus sign. But a new owner likely would bulldoze it, he said, and the Albuquerque collector at least would preserve it. The Patels received a grant in 2008 from the National Route 66 Corridor Preservation Program to help restore the sign.

Bob Beaulieu, manager of the New Mexico Route 66 Museum in Tucumcari, a few weeks ago saw a post on Facebook the Cactus sign was for sale. He offered $600 cash but had to get approval from the museum’s board of directors for the transaction.

About 75 minutes later, with cash in hand, Beaulieu said learned he was outbid by an Albuquerque collector who offered $8,000. He said the museum’s annual budget is $10,000 to $12,000 – not enough to make a counteroffer.

“We didn’t move fast enough,” Beaulieu said of the initial offer. “We’re deeply saddened, because it’s an artifact of Route 66.”

Johnnie Meier, former president of the New Mexico Route 66 Association and owner of the Classical Gas gas-station museum in Embudo, knows the collector who bought the sign but didn’t reveal his or her name. The collector will give the sign to a proposed neon-sign park in Albuquerque, he said.