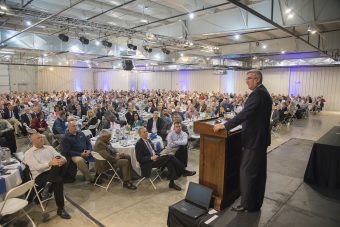 Tickets for the 6th Annual RV Industry Power Breakfast, slated for the early morning hours of May 3 at the Northern Indiana Event Center–RV/MH Hall of Fame in Elkhart, Ind., go on sale online Monday (March 26) morning at RVBUSINESS.com.

RV Business is the sister publication to Woodall’s Campground Management.

The other keynoter for this year’s Power Breakfast, which is expected to again draw a capacity crowd of more than 850 business people and civic officials, will be Democratic U.S. Sen. Joe Donnelly, a Granger, Ind., resident who is expected to kick off a statewide campaign tour that morning as part of a hotly contested Senate race that is drawing plenty of national attention.

To purchase tickets for the breakfast ($40 single, $340 for a table for 8), click on the banner on the right side of the RVBUSINESS.com home page. Power Breakfast tickets may also be purchased in person by credit card from 8:30 a.m. to 4:30 p.m. weekdays at the Elkhart offices of RVBusiness magazine (2901 E. Bristol St.), which facilitates the annual event under the auspices of an independent, all-industry organizing committee.

A catered breakfast will be available for early birds at 6:45 a.m. on May 3, while the program itself kicks off at 7:15 a.m. 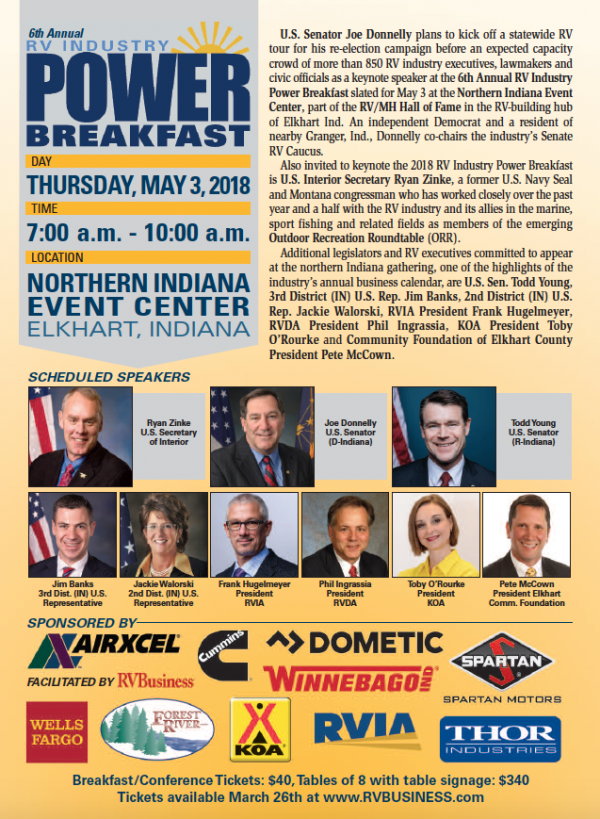