Wholesale shipments to retailers of all RVs finished up 2015 quite strongly, rising to 28,025 units in the Recreation Vehicle Industry Association’s (RVIA’s) December survey of manufacturers, 4.8% ahead of the final month of 2014 and the largest December total since 2005.

For the year as a whole, all RV shipments reached 374,246 total units, an increase over the previous year of 4.9% and the best yearly total since 2006. This year marked the sixth consecutive annual increase in RV shipments since the end of the last recession.

Seasonally adjusted, the annualized rate in December remained at or near the 400,000 unit level for the fourth consecutive month pushing final calendar quarter totals ahead of 3rd quarter results for the second year in a row.

While all towable RVs remained ahead of all motorhomes shipments, the percentage gain in Class C motorhomes was an impressive 40% greater than December one year ago. 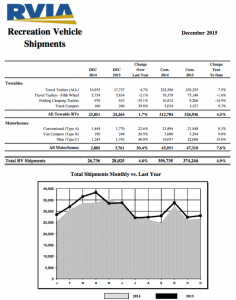