Shipments to retailers of all RVs continued to improve in 2012 reporting totals of 18,976 units in the September survey of manufacturers, a gain of 12.7% over this same month one year ago, the Recreation Vehicle Industry Association (RVIA) has reported.

On a seasonally adjusted basis, shipments in September were at an annualized rate of 254,400 units, down 10.6% from the August pace and the lowest annualized total since January of this year. Even so, actual September shipments of all towable RVs were up 10.3% from this same month one year ago while all motorhome shipments were up 34.6%.

Travel trailer shipments have grown by 16,446 units this year and continue to command the largest unit volume of all vehicle types. Fifth-wheel travel trailers have gained 3,986 units while Class A motorhomes were up 719 units and Class C motorhomes improved by 385 units compared to this same period one year ago. Only folding camping trailers were lower in volume through September this year as compared to the corresponding nine month period in 2011.

The graphic presentation of the report follows. 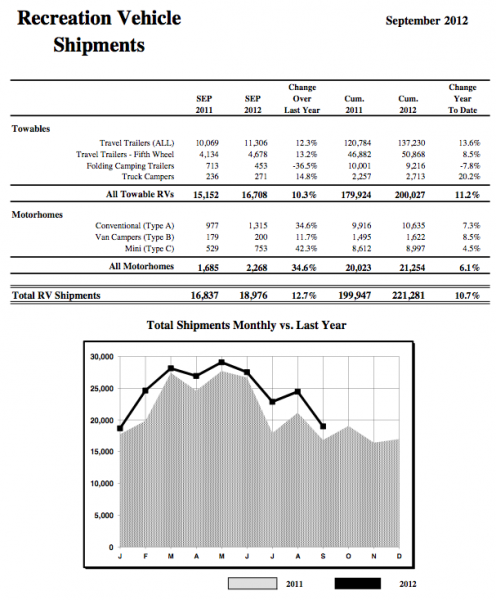