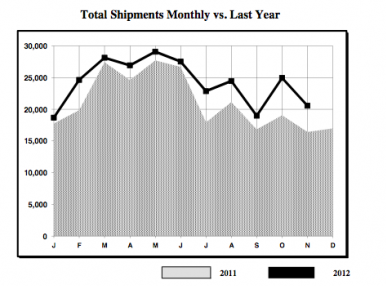 Many industries wish they could have the performance that the Recreation Vehicle Industry Association (RVIA) recorded in 2012, the South Bend (Ind.) Tribune reported.

With December numbers yet to be fully tabulated, RV shipments to dealers were up each month through November compared with the corresponding month in 2011 (see accompanying chart).

Those figures are very important to the Northern Indiana economy.

The RVIA estimates that 82% of all recreational vehicles built in the U.S. are made in northern Indiana, with more than 24,000 people employed in either the RV manufacturing or supply sector.

RV wholesale shipments to retailers increased to 20,561 units in November, a 25.2% increase from November of 2011.

This year’s total will mark the third straight increase in shipments since the industry bottomed out with 165,700 units in 2009 as a result of the recession, the credit crunch and higher gas prices.

Based on estimates, total shipments for 2012 could reach 285,000 units after December numbers are completed. But that figure would still be well off the mark set in 2006 when 390,500 RVs were shipped.

“The numbers being up are a good sign for everybody,” said Matt Rose, director of recreational vehicles for the Recreation Vehicle Indiana Council (RVIC). “Everyone knows what direction we’re going.”

The fact that the fiscal cliff was averted, with taxes for the middle class remaining similar to last year, also helps, he said.

And RV shipments could increase another 4.5% in 2013 based on predictions offered at the RVIA’s annual show in Louisville, Ky., in November.