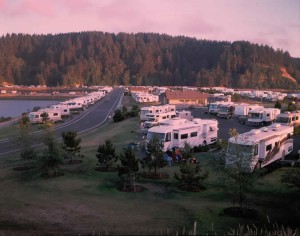 The Winchester Bay Sanitary District in Winchester Bay, Ore., will find out this summer if waste dumped by recreational vehicles is hindering the district’s new wastewater treatment plant, according to The Umpqua Post.

Staff said the district will pay $7,703 to complete the study at Winchester Bay RV Resort.

RV resort manager Patrick Paternostro protested the study, which will place sanitary district employees at the resort throughout tourist season.

“It’s more of a customer service (issue) that I’m worried about,” Paternostro said.

Winchester Bay RV Resort is the RV park closest to “the end of the line,” Davenport said.

Davenport said he believes the plant can keep up with the demand from the RVs.

“The plant is designed for handling this community,” he said.

But the district will use the numbers to ensure the wastewater plant can meet strict Oregon Department of Environmental Quality standards.

The district board said DEQ requirements on the plant’s output became much tougher when an agreement between the agencies ended.

Davenport said the district has to find out how much chemicals are being dumped by the RVs before it can react.

“That’s the first step. We don’t know what we’re going to find out,” he said.

The district will hire employees at minimum wage to count RVs in the park on peak days, including Fourth of July weekend and the weekend of the annual DuneFest event.

Waste samples will be drawn from pump stations near the RV resort and shipped off to be analyzed.

“That’ll give us some good data,” Simmons said.

Paternostro said he is concerned about district surveyors interacting with the resort’s customers.

“I don’t feel comfortable with some kids being out there,” he said.

Simmons said the district will take on the liability, and train its surveyors accordingly.

“We plan to hire some competent people,” she said. “They’ll be district employees.”