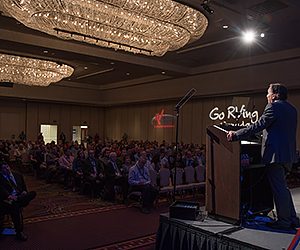 “We’ve heard for years about the Baby Boomer generation driving the market, but there’s a new generation of Millennials that is priming the pump for continued growth,’’ Ingrassia said. “A new Go RVing survey to be released in a few weeks will show that the average RV buyer is getting younger.’’

He also pointed to a Kampgrounds of America Inc. (KOA) study earlier this year reporting that Millennials make up the largest percentage of new campers.

Ingrassia’s comments came during the annual meeting at the Con/Expo, sponsored by the RVDA, RVDA of Canada and the Mike Molino Learning Center.

Highlighting the session, former RVDA Chairman Jeff Hirsch of Campers Inn received the 2016 RVDA Chairman’s Service Award for having made a ‘’significant contribution’’ to RVDA and the RV industry. By secret vote of the RVDA board, Hirsch, who is chairman of the RV Assistance Corp, also received the James B. Summers Award, RVDA’s highest honor named for the organization’s second chief of staff.

“He is a second generation dealer who has built his dealership group into a major force within the industry, while continuing to serve his fellow dealers in the association in many capacities,” said Ingrassia in presenting the James B. Summers award to Hirsch. “This includes three stints on the RVDA Board of Directors, service on the RV Learning Center Board, and on the Go RVing Coalition.

“I’ve been fortunate to work with many great volunteer leaders during my time at RVDA, and there’s no one more deserving than Jeff Hirsch.” 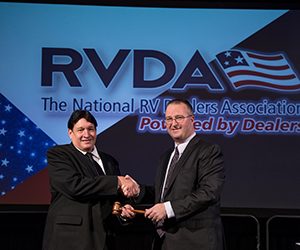 In other business during the annual meeting, RVDA Chairman Brian Wilkins of Wilkins RV in Bath, N.Y., turned the gavel over to Darrel Friesen of All Seasons RV Center in Yuba City, Calif., who will take over as RVDA’s chairman for 2017.

During his remarks, Ingrassia said RVDA is working with other RV industry and outdoor associations to let the incoming Trump administration and Congress know that “outdoor recreation is a major contributor to economic growth in the U.S. and the overall health of its citizens.’’

“Outdoor recreation needs to be positioned like tech or aerospace or autos as a major economic driver in the U.S. and we are ready with policy recommendations to advance this agenda,’’ added Ingrassia.

He noted the RVDA continues to fight ‘’overreach of the Consumer Finance Protection Board (CFPB),” which the association has contended is harming dealer’s ability to finance loans for their customers.

“But where we have excelled at bringing more innovation, more design and an enhanced look to product, we have failed at developing the back-end systems necessary to support our customer and their products,’’ Wilkins said. “If we want to grow this industry to a 500,000- to 600,000-industry, we will need to change the way we do business.’’

He said it’s necessary for manufacturers to improve ‘”complex supply chain issues that impact parts availability and interfere with our customers’ satisfaction with the overall RV experience.’’

More than 1,300 people representing RV dealers, manufacturers and suppliers are attending the Con/Expo, the theme of which is “Gear Up For Success.’’ The Expo portion of the event features some 140 exhibitors. A keynote address during the General Session Tuesday was presented by sales strategist Ryan Estis on ‘’Unleashing Your Inner Superhero: Keys to Achieving Breakthrough Performance.’’

In addition, the Con/Expo is featuring 39 speakers presenting 49 education workshops, and 25 Vendor Training +plus seminars to keep dealers on top of the latest products and services.