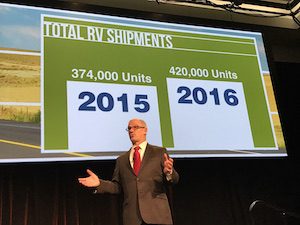 “These are historic shipment totals, and they mark the eighth consecutive year of growth for the RV market, and an incredible gain of 161% from the market bottom in 2009.” said Hugelmeyer in a press release. “We’re optimistic about continued growth into next year due to favorable economic conditions. Inflation and interest rates are near historic lows; a more vibrant economy has created jobs and reduced unemployment to near its lowest levels in decades; wages are finally showing signs of improvement; and household wealth has begun to accumulate toward record highs. These are all working in the RV market’s favor.”

Hugelmeyer added that beyond shipment statistics there are other metrics tracked by RVIA demonstrating that the RV industry is a robust, vital component of the national economy.

“This past summer, RVIA unveiled our RVs Move America study. It was the first-ever look at the total economic impact of the entire RV market, and the findings were astounding,” he said. “The RV industry generates an annual economic impact of $50 billion per year. It employs 289,000 workers who earn $15.8 billion in wages and benefits. Additionally, the industry contributes $5.7 billion in federal, state and local taxes.”

Hugelmeyer said that this data provides a powerful message to share with governmental contacts as RVIA works in a new political environment.

“The political landscape shifted earlier this month with the election of Donald Trump and Mike Pence, and a new administration present the potential for fundamental changes in economic policies and regulations,” Hugelmeyer said. “As a non-partisan organization, RVIA will continue work on both sides of the aisle to promote and protect the interests of the RV industry. I’m confident that we will be able to successfully work with the Trump administration and the new Congress on issues impacting the RV market.”