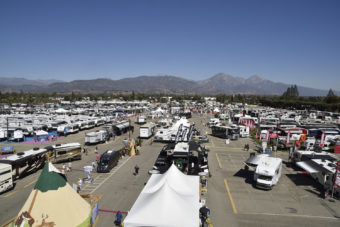 RVs cover the grounds at the Los Angeles Fairplex in Pomona, Calif.

Despite a steady rain and chillier weather — at least by West Coast standards — on the final weekend of the 10-day 66th California RV Show, the event registered an all-time attendance record of 40,191 at the Los Angeles Fairplex in Pomona, edging out last year’s high mark of 40,167.

“Opening weekend we had approximately 8,500 people on Saturday — which is typically our strongest day — and then around 7,600 on Sunday,” said Tom Gaither, western show director for the host Recreation Vehicle Industry Association (RVIA). “The weather was gorgeous all week and then Saturday it pretty much rained all day. But the traffic was still steady and the main thing for dealers is that we didn’t see a lot of lookers. People were here to shop for RVs.”

According to Gaither, that strong buying component for the Oct. 5 -14 show was fueled by consumers annually “marking the dates on their calendars,” coupled with the fact that the event represents the largest retail gathering of the year for West Coast dealers.

“What happens in California is that dealer lots see a slowdown August through September because people are waiting for the show,” Gaither told WOODALLSCM.com. “I had some dealers calling me as early as April to lock in space at Pomona. They know this is the biggest retail event of the year and they come here with tons of new product.

“One of the real indicators of the show’s significance in the region is that 40%-45% of the attendees were repeat customers,” he added.

Mark Rosenbaum, general manager of Mike Thompson RV which operates five dealerships in California, noted, “What I found was there were three reasons consumers came out — to learn about the lifestyle, to buy a new vehicle or to trade in products. There was a very positive outlook about the industry as a whole and people came to the show with the intention to buy. We were up from last year and were happy with the results.”

Steve Richardson, owner of Richardsons RV Centers Inc. with four dealerships in the state, reported that his company saw a different product mix being sold than in previous years.

“We were moving a lot of higher-ticket items,” he said. “We still sold more trailers but the motorized sales were definitely up from past years. The OEMs also brought a ton of new 2019 floorplans that we had a lot of success with. The overall design and the innovation was fantastic. But we also had a good inventory of 2018 models, which gave us the opportunity to give customers some really good deals. Overall, it ended up being the third largest show in history for us.”

Billed as the West Coast’s largest and oldest annual consumer show, this year’s event featured approximately 1.1 million square feet of display space with more than 17 dealers displaying over 1,300 motorhomes and towable RVs. Gaither reported that he initiated a realignment in the show’s configuration to alleviate a growing problem that had surfaced in the past few years.

“We put together a very compact show layout that added 300 parking spots,” he said. “Last year we had a lot of problems so a priority going in was to increase the area for parking. We also brought in trams to bring in the people in remote locations and also provided guest buses for RV workers. That opened up a lot of spaces close to the gates. It really seemed to make a difference and I think may have increased our attendance.”

Both Rosenbaum and Richardson reported that in addition to an uptick in traffic they also came away from the show with an upbeat perspective on the overall health of the industry.

“The show seemed to rejuvenate the dealers,” Rosenbaum offered. “Attendees were really excited and enthusiastic. I’d say the industry is on fire and things are definitely looking good for 2019.”