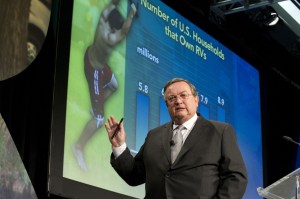 In a presentation titled “What’s Up!” at Outlook 2012: Up & Away, held Tuesday (Nov. 29) at the National RV Trade Show in Louisville, Ky., Richard Coon, president of the Recreation Vehicle Industry Association (RVIA),  said that new findings from the just-released RV Consumer Demographic Profile provide encouraging news about the health and long-term viability of the RV industry.

“RV ownership is at its highest peak ever with 8.9 million U.S. households now owning an RV,” said Coon. “This number has been on the rise since 1993, and the growth reflects the enduring appeal of RV ownership despite economic challenges.”

According to a news release, Coon reported that ownership has surged among adults age 35 to 54 years old with 4.3 million households owning an RV in this key age group, up from 3.5 million in 2001 and 3.9 million in 2005. “This is a very strong finding and is an indication of the success of the Go RVing effort to attract younger buyers to the market.”

In addition to showing steady growth in RV ownership, Coon said the RV Consumer Demographic Profile also offers promising data regarding future RV purchase intentions. When purchase intentions are combined across current owners, former owners and new market entrants, a total of 21% of U.S. households stated intentions to purchase an RV at some point in the future.

“These intentions won’t be realized overnight, but they clearly show continued strong demand for RVs in the years ahead,” Coon explained. “The 2011 data was collected in a challenging economic environment but track closely with the findings from 2005 when the economy was performing better.”

“The shipment number forecast for 2012 would essentially keep totals at the same level for the past three years,” said Coon. “In this uncertain, volatile economy, having steady, stable shipments isn’t all bad. If fact, it’s a good place to be when you also consider the long-term prospects for the RV market found in the new demographic research.”