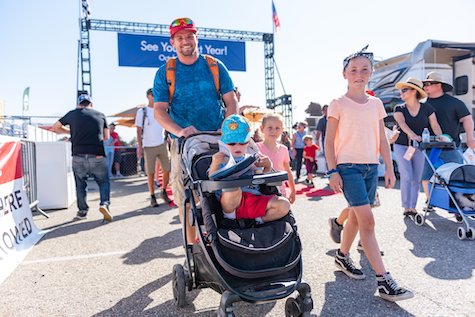 The show, which runs through next Sunday, was originally held at Dodger Stadium and had been located since 1992 at the L.A. Fairplex in Pomona.

“It’s going very well, and the public is really appreciating the free parking,” said Gaither, whose Reston, Va.-based trade association has signed a multiyear contract with track officials. “It’s been a home run as far as moving the show from Pomona. We are currently 19% ahead of last year and this weekend we had a record day. Now, this is my ninth year to run the show, but on Saturday we had 10,124 people. As far as I know, that’s a record.

“People just kept coming,” added Gaither. “We were slammed, but the parking lot never filled up. There was plenty of parking.”

Gaither’s take on the positive gate numbers at Fontana?

“Well, I think there are a couple of things,” he said. “Some people want to come just to see the new show. And we have a lot of marketing help from the speedway, which we’ve never had anywhere else. For example, we had every email from everybody who sits in the grandstands during the race, and we pounded that about three times. All of their infield campers got two free tickets for the show in their goody bags last March when they pulled in to the Speedway.”

In addition, tickets have been on sale at 203 O’Reilly Auto Parts stores with which the Speedway has a marketing partnership. Gaither reported a $15 ticket was selling $10 at the cash register, and “that’s had an impact.” The speedway’s management, in addition, has offered a lot of operational assistance and in general has been “a fantastic partner.”

Improvements in RVIA’s cyber-marketing have also been a factor, with three RV bloggers on hand reaching out on behalf of the show, while a new rectangular show layout, in his view, has been a real plus.

Offering a similarly upbeat assessment were spokesmen for Lance Camper Manufacturing Corp., the Lancaster, Calif.-based subsidiary of REV Recreation Group, who reported strong sales of both their truck campers and travel trailers — a pickup in consumer interest they’d also noticed, especially with truck campers, at September’s Hershey Show in Pennsylvania.

“Despite the hot weather — I think it was into the 90’s — we thought the traffic was very good for the first weekend,” commented National Sales Manager Gary Conley. “The new setup at the new location was good, too, in that it was easy for people to walk through the displays and see all the product. We look forward to a good week and a good closing weekend.”

Dealer Frankie Barouti, owner of Giant RV, a Southern California-based retailer with four locations, reported that “traffic was phenomenal” and attendees were “definitely in a buying mood” during the opening weekend of the 10-day show. “Our salespeople have been going non-stop,” Barouti related. “There have definitely been a lot of customers and we’re blessed to have them. It’s really been a good show and no doubt we’re happy with the results so far.”

We’ve been selling a lot of toy haulers and entry-level travel trailers, and our diesels are also moving,” he said. “Pretty much everything across the board has been decent, and then there are certain products that are really hot. It’s definitely as good as last year which was a really strong show for us.”

Steve Richardson, president of Richardson’s RV Centers Inc., with Southern California locations in Colton, Riverside and Temecula, is pleased with both the consumer traffic as well as the new venue.

“In fact, when I was at the show this weekend I was talking to several customers who said they had never even been to the show when it was in Pomona,” Richardson told RVBUSINESS.com. “And I’d have to say it’s been very good moving from Pomona to the Speedway — if for nothing more than the availability of beautiful modern bathrooms. And, as far as our display sites, there’s no comparison. This is ten times better than Pomona.”