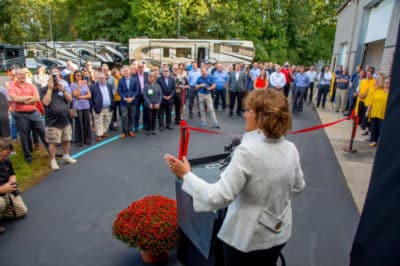 Witnessed by several hundred people, the event symbolically announced that RVTI is open for business and served notice the industry is intent on recruiting, training and certifying service technicians.

“When do you see the manufacturers, suppliers, dealers and the community all coming together for one cause?” Hemmeler told RVBUSINESS.com, sister publication to WOODALLSCM.com, as he scanned the crowd. “This is a monumental time in an industry that I’m new to, that I just feel so privileged to actually have an opportunity to lead this, and be the true neutrality, putting things aside for the sole purpose of helping the consumer by training these techs, which we all know are a vital piece of the success and the happiness of RVers across the country.”

Hemmeler also acknowledged that it’s “go-time” for the Institute. Up until now much of the activity has been in laying the foundation for RVTI and its programs. With a cross-section of the industry as witness, Monday’s ribbon-cutting symbolically ushered RVTI into the implementation phase, and he said everyone is eager to get going.

“I think it starts with the relationship with Camping World, who’s been here training so they can take what we’ve created back and train their employees. I think that’s a big initial start. That’s a partner that’s going to potentially train and certify 500 to 700 new technicians next year using the RVTI platform as the core curriculum for that,” Hemmeler said, adding that the Windham Correctional Facility in Texas also was on site for the same purpose.

“From here out, it’s just scoping it out and improving the model of what I believe can be a very, very successful and long-term solution to not only filling the technician shortage, but also training the technicians so that they can quicker identify, diagnose, and troubleshoot when things do break,” he added.

Among the many movers and shakers in the crowd was RV Industry Association (RVIA) Interim President Craig Kirby, who told RVBUSINESS.com that the association “couldn’t be more excited about the opening of the Institute. “It’s been decades in the making, and many people have worked so hard to get us here, today. It’s a thrill to actually see it come to fruition,” he noted.

Echoing those comments was RVIA Chairman Garry Enyart, director of RV business for Cummins Inc., who along with several others was instrumental in shepherding RVTI’s development.

“I’ve served on the education committee for over a decade, and we’ve been talking about something like this for that long or longer. This all started as part of the RECT — Repair Event Cycle Time — Six Sigma project that I sponsored. It’s amazing to see what we’ve accomplished in a very short period of time, about two and a half years or so.

“Taking care of our customers is the most important thing we do,” he continued. “And now we have people waking up every day thinking about how we can do that more efficiently and better. Making sure that the customers have a great experience, we’ll keep them in the industry and the lifestyle, and help us sell more product and continue to grow as an industry.”