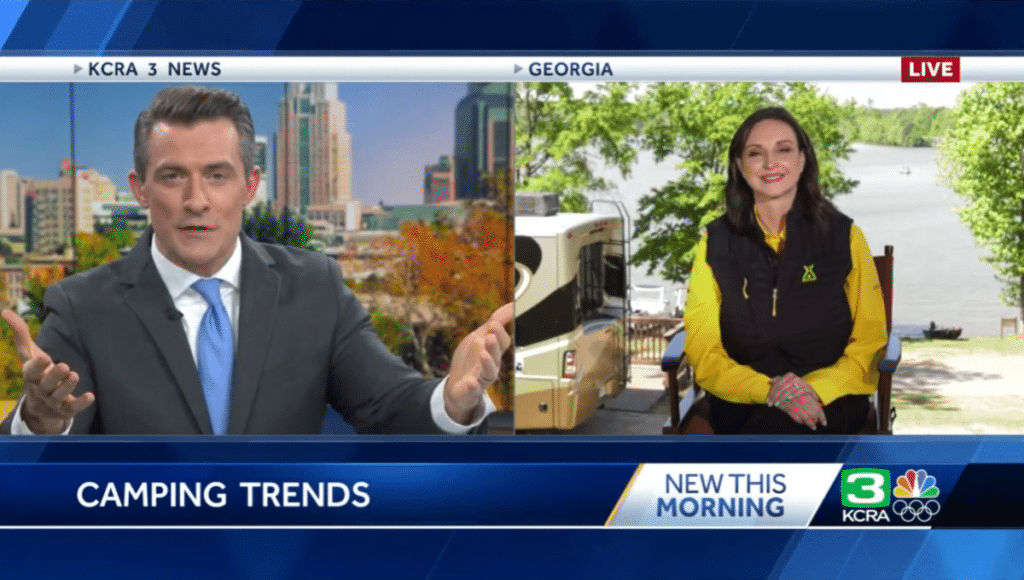 Click on the image to see the video interview.

Kampgrounds of America Inc. (KOA) CEO and President Toby O’Rourke completed a satellite media tour (SMT) on April 21 sharing findings from the 2021 North American Camping Report and talking about the continued popularity of camping, according to a release. Appearing live from the Lake Oconee/Greensborough KOA Holiday near Atlanta, O’Rourke kicked off another season of camping with 29 interviews with media outlets in top markets across the U.S.

The segments that have aired thus far have garnered over 15 million impressions. Six interviews have yet to air.

“Camping saw a big increase in interest during the pandemic as people wanted to safely reduce stress,” O’Rourke said during the April 21 SMT interviews. “We estimate over 48 million households went camping last year including 10 million that started camping for the first-time. Our trends are showing that they are going to continue camping this year.”

O’Rourke supported the 2021 North American Camping Report’s prediction for a successful year for the camping industry with KOA’s own impressive business results.

“While a lot of hospitality and travel was down during the pandemic camping surged, “said O’Rourke. “Our business is booming. KOA is up 30% over 2019 which was our best year in the 60-year history of our company. Advanced reservation deposits are also up almost 60%.

She also discussed the desire of both experienced and new campers to try new ways to get outdoors. This desire to try new and unique forms of camping also points to the continued popularity of the activity according to O’Rourke.

“We’re not just seeing changes in the ways people are camping, we are also seeing an evolution in who is camping” O’Rourke shared. “Campers are younger and more diverse. We have seen steady increases in diversity since we started our report and right now 60% of new campers are from non-white groups. These trends speak so well to the future of the camping business.”