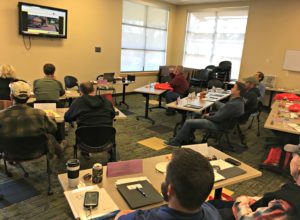 Many campground owners turned out for SDCOA’s spring meeting.

Occupancy expectations was just one of many topics covered at the April 18 spring gathering of the South Dakota Campground Owners Association (SDCOA), held in Rapid City, S.D.

Attendance was open to anyone, which generated interest even from Minnesota, according to a press release. Yet, Old Man Winter challenged the day with a snow system that covered the central and eastern parts of the state.

A short business meeting was held before launching into expert sessions by industry supplier members. Topics included online reservations and front office management programs, insurance for campgrounds, preparing to sell a campground and managing online reviews. There was also a brief presentation by Kevin Quinn, of the Black Hills Tour Company, a company that caters to showing off key attractions to tourists who are staying at the area’s campgrounds.

In addition, there were formal presentations by Jeff Sims, senior director of state relations and program advocacy at the National Association of RV Parks and Campgrounds (ARVC), Peter Pelland, of Massachusetts-based Pelland Advertising, and Mark Douglass, co-founder and CEO of the Colorado-based RVing Accessibility Group.

“It was a packed day,” said Mary Arlington, executive director of the SDCOA. “Programs such as this can’t be achieved alone. It took the participation of everyone. Barry Conley, owner of It’s All About Satellites, was the event’s sponsor, and our other industry supplier members also provided great support. And of course, the campground members; without them there would be no reason to do what we do. The association is a community that works together, forming a remarkable team.”

Members were also shown more of the new CampSDakota product line, with the recent launching of social media to attract campers to the state. They were also shown the newly expanded SDCOA website.

“The sites aren’t as well developed as they will be in another year, but we’re farther along than last autumn,” explained Arlington. “Program development takes time, as does a door-to-door membership drive that we’re about to launch. If only there were 100 hours to a day.” 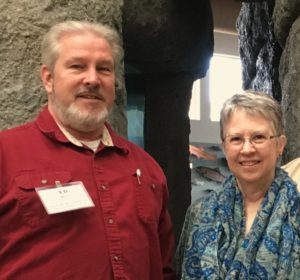 Retiring from their previous long terms on the Board of Directors are Ray Zobel, of Custer’s Gulch RV Park & Campground, and Lanna and Bryce Christensen, of Chris’ Campground.

“Some of these current and past directors led the association for many years,” said Arlington. “We are taking steps toward inspiring growth, both in membership and in leadership. While we give a few leaders a reprieve from the duties, we know they will remain active and will one day step up again to lead. Rotating leaders is healthy. Hopefully in the near future we’ll also see some from the eastern part of the state step into leadership roles. After all, this is a statewide association.”

The next gathering will be in autumn and will take place in Pierre. Details will be outlined and announced by mid-August.