Sequim Bay Resort to Be Named for 'The Duke' 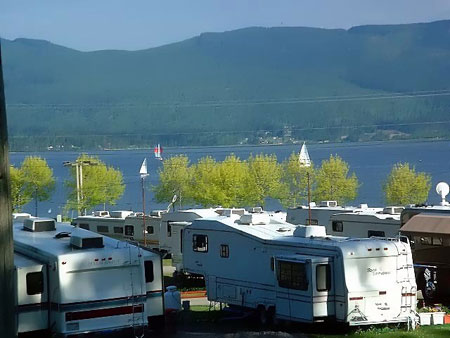 View of Sequim Bay from the RV park office.

Plans are under way to revitalize Sequim Bay Resort near Sequim, Wash., into a rustic park that “The Duke” would be proud to visit.

One of the first changes will be renaming the park after his father: The tentative new name is John Wayne’s Waterfront Resort.

Although Sequim has grown significantly since the Wayne family regularly visited, Ethan Wayne hopes the new changes will bring the resort back to a time of creating community and promoting the rich resources around Sequim.

“Life with my father was very rustic,” he said. “Growing up, we’d spend every summer in Sequim or Victoria. This was one of his favorite spots.”

Kitty-corner to John Wayne Marina, the resort hosts 42 RV sites and eight cabins, to which John Wayne Enterprises made improvements five years ago. Wayne said the cabins already have a rustic feeling and they want to embrace the John Wayne name and his love for Sequim.

“The natural beauty of the area and Sequim is what sells itself,” he said. “Sequim is a more vibrant community than the last time I was here. It’s pleasant to hop on the (Olympic Discovery Trail) and bike. They’ve really opened up the activities in the area.”

He and new park manager Tracy Swanson are making a wish list of projects for the resort to make it more attractive and competitive while still affordable. Planned additions include a convenience store at the entrance, rentals for bikes, stand-up paddle boards and kayaks, creating more tent sites and improving more resort infrastructure.

Swanson said they want to make it easier for people to visit by adding more online services such as reservations and social media.

“We want to create awareness because a lot of people who live here don’t know where it’s at,” Swanson said. “It’s a little gem in Sequim.”

Wayne said they want all types of visitors from vacationers to weekenders to people riding their bikes along the trail.

Current facilities include 30 full hookups for RVs, monthly rental rates for RVers and full amenities in cabins with a view over Sequim Bay. Swanson said when they add tent sites it will create more of a sense of escape because campers will need to park and walk to each site.

Wayne said he plans for many of the changes to be in progress by the end of the year and completed before next summer.

The resort is John Wayne Enterprises’ only operation in Washington. Plans for a future resort along the water are on hold due to the economy.

“We’re going to continue to operate the RV park with no plans to bulldoze anytime soon,” Wayne said.

The company plans to keep up-to-date with City of Sequim permitting and guidelines for possible plans to build in the future.

Wayne said he’s looking to do more with his father’s name to create positive events for charity, such as the John Wayne Cancer Foundation, of which he is director.

For more about John Wayne and his family’s efforts, visit www.johnwayne.com.