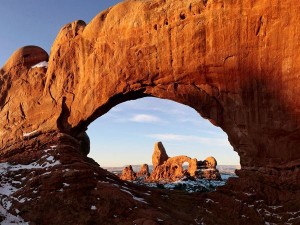 Like other national parks, Arches in eastern Utah is so popular that it runs out of room for parked cars during the height of the season.

The National Park Service has done a study that recommends a mass transit shuttle system similar to those at Zion and Bryce to cut down the number of private cars. But the estimated cost of $3 million a year is beyond the means of the park service.

That sounds discouraging, but park managers should keep working on their plan. Refinements could cut costs, and there is room to increase entrance fees to help pay for the shuttle system.

Today’s entrance fees of $5 per person or $10 per car are so inexpensive that they could be doubled and still not price Americans with modest incomes out of the park. The study is right that the shuttles should be free with the price of admission. Charging an additional shuttle fare would discourage their use.

The preferred plan would operate the shuttle system between 8 a.m. and 5 p.m. from May through September. It would operate every 15 minutes and make 11 stops: Visitor Center, Park Avenue, La Sal Mountains Viewpoint, Courthouse Towers, Balanced Rock, Upper Windows, Wolfe Ranch/Delicate Arch Trailhead, Delicate Arch Viewpoint, Fiery Furnace, Sand Dune Arch and Devil’s Garden Trailhead. If you are familiar with the park, you know that these stops cover the most popular features.

Part of the challenge with Arches is that a single, 18-mile road, plus a couple of spurs, serves the park, and the only campground lies at the end of the road at Devil’s Garden. So, even though much of the park affords wide-open vistas, the road limits access to a single point. Parking along that road is limited because it was designed decades ago when visitation was planned at 75,000 annually. More than 1 million people visited the park last year.

The limited road and parking system can cause overcrowding at popular features, such as the Devil’s Garden Trailhead. The crush of private cars also pollutes the park’s air, casting a haze on the spectacular views of Delicate Arch and the La Sal Mountains beyond.

Park management has studied other strategies to cope with visitor crowding, such as requiring reservations to enter the park and directing people away from sites that are jammed during peak hours. They would be far less expensive than the shuttle system, but they also would be less effective on a cost/benefit basis.

Shuttles have improved the visitor experience at Zion and Bryce. They could do the same for Arches.