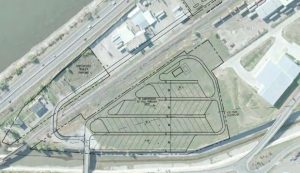 Shown is an drawing of the new proposed location for Sioux City’s first campground.

A Sioux City, Iowa, campground once envisioned for a scenic spot along the Big Sioux River may now end up near the proposed Bomgaars Ag Expo Center and directly east of a small hog plant, according to the Sioux City Journal.

The new plans would be a refocusing of the initial vision for the Sioux City’s first public campground, which city officials originally viewed as a rustic  destination for families looking for “staycations” but now would be positioned in a more industrial setting with an eye toward serving exhibitors at the expo center.

The project also has been pushed back a few years in the city’s proposed capital improvements budget.

In mid-2016, the city viewed preliminary site designs for a 52-space campground at 3400 Sioux River Road near the Big Sioux River, but the city later ran into problems acquiring the necessary land from private owners.

The council then moved the project back a year during last year’s budgeting process, instructing staff to continue exploring alternate locations.

City Parks and Recreation Director Matt Salvatore said the city sees the new proposed location, on city-owned land to the south of the proposed ag center, to be a logical fit because of the need for a campground to serve those visiting the expo center for agricultural and equestrian events.