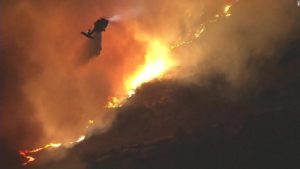 A Northern California wildfire has killed 44 people, making it the deadliest in the state’s history.

California’s Camp Fire is now the deadliest in the state’s history, killing 44 so far, with more than 200 people still missing, according to CNN.

The blaze, which is burning in Northern California, is not the only wildfire firefighters are dealing with. Fierce winds continue to threaten lives and homes in Southern California’s Woolsey Fire, which has killed two people so far. The strongest Santa Ana winds in the south may bring gusts near hurricane force today (Nov. 13), CNN meteorologist Dave Hennen said.

Debbie Sipe, executive director of the California Association of RV Parks and Campgrounds (CalARVC), told WOODALLSCM.com that the heavy smoke and threat of fire is definitely having an impact on local park owners.

“The air quality is horrendous,” explained Sipe. “Nobody goes camping when this happens, but at the same time, parks end up becoming evacuation places for anybody that’s able to get their RVs out. So, they typically fill up very, very quickly with folks that have been evacuated. So while they’re not getting the tourists, they’re getting some longer stays waiting for the evacuations to lift. That pretty much helps them not have too much of a business loss.”

Sipe noted that some park owners that were impacted by fires earlier in the year have reported a 75% decrease in occupancy as a result.

So far, Sipe said she has not heard of any parks that have sustained very much damage, although one member park in the town of Paradise, where the fire had destroyed 6,500 homes and 260 commercial businesses, is “probably destroyed,” she noted.