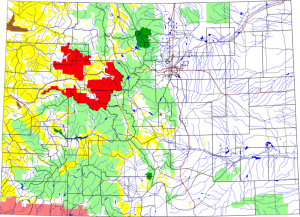 The White River National Forest is highlighted in red in this map of Colorado, courtesy of Wikipedia.

“The fees go up a buck, but that’s not unusual,” Mike Kenealy, recreation and special uses coordinator for the White River National Forest, the Summit Daily News, Frisco, reported.

A new concessionaire, White River Recreation Co., is in place for the forest, but Kenealy said that’s not why fees are rising. He said the hike happens from time to time.

Most of the fee increases are at family-type campgrounds across the White River National Forest. In Summit County, the company primarily operates sites on the banks of the Dillon Reservoir — Lowry and Prospector on the Frisco Peninsula, Peak One and Windy Point, Pine Cove and Heaton Bay.

Site fees vary depending on services, ranging from $17 at Pine Cove Campground to $24 at Heaton Bay, for those hooking up to electric. On the flip side, day-use fees went down a few dollars to $5 from last year’s $8.

Overnight guests will be charged a $5 extra vehicle fee for the second vehicle at a site. The previous concessionaire charged that fee for the third vehicle.

Other than fees, the public shouldn’t see much change in campground operations.

“It’s a different company, but they have a long history of good campground operations across the country,” Kenealy said, adding that there’s a special use agreement in place that the company must adhere to.

However, the company plans to add sites to the online advance reservations system, as well as extend the reservation window beyond one week in advance.

The new concessionaire may also extend some campground seasons, such as a handful around Dillon Reservoir, though they’ll remain first-come, first-served before Memorial Day and after Labor Day, Kenealy said, but reservations are available between the holidays. Typically, the season is mid-May through mid-September, but campgrounds such as Heaton Bay could remain open until Oct. 31.

The Forest Service operates campsites at Green Mountain Reservoir, Kenealy said. No changes go into effect at those sites. The Blue River Campground is also being run by the Forest Service rather than a concessionaire, with mountain pine beetle destruction causing the agency to take it back for mitigation. It reopened last year after being closed.

Some Green Mountain Reservoir sites — McDonald Flats, Prairie Point, Cataract Creek — and Blue River campground will open May 4. The opening of the rest will be dependent on weather and demand, but all will be open by Memorial day, Waugh said.