Smoking Ban in State Parks May Be in Order 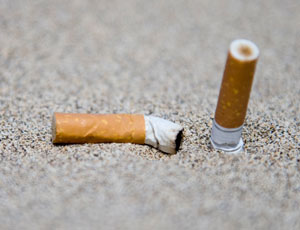 Editor’s Note: The following is an editorial that appeared in the Eric (Pa.) Times-News.

But those humorous puns drew attention to a serious topic. Cigarette butts and filters are the No. 1 litter item that volunteers collect along our shores and around the globe during the International Coastal Cleanup (ICC).

To track the trash despoiling our beaches, lakes and other waterways, volunteers catalog every piece of junk and litter they find.

In 2011, Lake Erie volunteers collected 7,577 pounds of trash, including 19,716 cigarette butts and cigar tips; 6,277 beverage containers; 5,495 food wrappers; 4,547 beverage caps, lids and straws; and 2,578 plastic bags, according to Don Benczkowski, the local ICC organizer who works for the Coastal Resources Management Program in the state Department of Environmental Protection (DEP).

The ICC takes place on the same day around the world, but local schools often organize their own cleanups to help the environment. The reaction to having to pick up someone else’s litter is universal: gross. “It was yucky! There were lots of cigarette butts,” a student at Sarah Reed Children’s Center said after she helped clean up her school’s neighborhood.

Cigarette butts and plastic filters aren’t just ugly. They take years to decompose and can harm marine and wildlife. So how can we stop smokers from littering on beaches? The state Department of Conservation and Natural Resources is considering a trial program to ban smoking at some state parks. The program hasn’t started and no parks have been identified for the pilot program.

But the possible ban on smoking in parks has ignited controversy across Pennsylvania. “If they ban it, it would be kind of stupid because there are a lot of smokers,” Robert Guercio, of Williamsport, told WNEP-TV as he visited Ricketts Glen State Park in Luzerne County. He said the park should have more designated areas with ashtrays for smokers.

Maybe Guercio’s idea is the right solution. But we also know that people continue to litter even when trash cans and ash-disposal cans are handy. Just take a walk through downtown Erie after a weekend of revelry and you’ll see lots of evidence that smokers and nonsmokers alike don’t have enough regard for our environment.

“When we did our school cleanup for the International Coastal Cleanup, I noticed that Erie is a lot dirtier than I thought. In just one block, we found 1,236 cigarette butts,” David Tullio, a student at St. Peter Cathedral Center, wrote for our “Learn About Your Environment” page in 2010. Is that the kind of legacy we want our kids to inherit?

The 11th annual Pennsylvania-Lake Erie International Coastal Cleanup is Sept. 12 from 9 a.m. to noon at 15 sites in Erie County to pick up trash. When you pick up cigarette butts, you might join the call to ban smoking at state parks, too. To volunteer, visit www.GoErie.com/coastalcleanup.