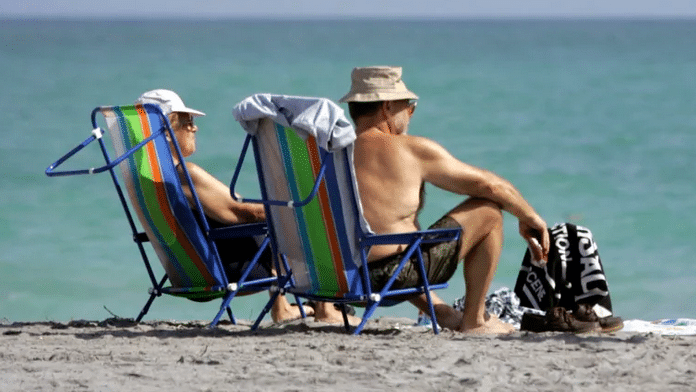 In anticipation of the winter travel season, the federal government has issued an online alert to seniors, advising them to stay home during the COVID-19 pandemic. But the message may have little impact on snowbirds who are determined to escape the Canadian winter, according to a report by the Canadian Broadcasting Corporation.

“I don’t like winter. I hate it. I hate it with a passion,” said Steve MacDonald, 77, of Oakville, Ont. He has already booked a Dec. 3 flight to Florida for himself and his wife, so they can spend the winter at their rented condo in Key Largo.

“Down there, [I’ll] be swimming outside and taking in some sun, getting some vitamin D and cheap rum.”

He’ll be in good company. The Canadian Snowbird Association estimates that around 30% of its more than 110,000 members will head to the United States Sunbelt this winter — despite soaring COVID-19 cases in the country and the Canada-U.S. land border closure to non-essential traffic.

Snowbirds can still fly to the U.S. and ship their cars. But the Canadian government is asking seniors to think twice before leaving the country. “By choosing to stay home in Canada, you can help protect yourself, your family and those at risk … in our communities.”

Global Affairs Canada posted the alert on its web page for “older travelers” on Oct. 1 — one day after CBC News published a story about Canadian snowbirds heading south despite the pandemic.

Since the start of the pandemic in March, Global Affairs has advised all Canadians to avoid non-essential travel abroad. It says that the government may have limited capacity to help people who choose to leave Canada and then encounter problems

Snowbird MacDonald never saw the government’s alert for traveling seniors, and when he learned about it from CBC News this week, he wasn’t swayed. He said that he and his wife are healthy and plan to take all necessary precautions while in Florida, including sticking to their gated community.

“We’re just gonna keep doing the same thing that we do here, like you don’t go out with a bunch of people and party and have people over for dinner,” said MacDonald. “I feel as safe going down there as I am here.”

He also said that he has the added protection of COVID-19 medical insurance, in case something does go wrong. Insurance providers recently reinstated the coverage after suspending it for several months during the pandemic.

In September, travel insurance broker Martin Firestone told CBC News that less than 10% of his 1,000 snowbird clients were heading south. But now, he said, close to one third are packing their bags.

“They’re bucking the odds. They’re basically saying, ‘I’m going to go down there, and I’m going to be fine.'” Firestone said that traveling abroad right now does carry risks, such as hospitals at a U.S. destination becoming overloaded with COVID-19 patients.

He believes the government should make seniors aware of the risks but says that an online post won’t have much impact. “It’s on that website that very few seniors, I’m sure, check,” said Firestone, with Travel Secure in Toronto. “It should have been a campaign that appeared in newsprint and media and magazines.”

CBC News asked Global Affairs if it was planning an ad campaign; it didn’t respond.

Even snowbirds who learn of the government’s advice may still choose to ignore it, convinced that the benefits of going south this winter outweigh the risks.  Although CBC News informed snowbird Sandy Munro of the posted alert for traveling seniors, he’s still bent on going to his condo in Naples, Fla., in February. He said he’d go sooner but has family commitments keeping him in Canada for the next couple of months.

“I can only take so much of winter,” said Munro, 69, of Aurora, Ont. He argues he’ll actually be safer in Florida because he suffers from a lung disorder, which worsens in cold weather.

“As long as I’m in my little gated community — being COVID-aware — then I think my life expectancy would be longer by spending the winter down there,” he said.

However, Munro admits that if he did contract COVID-19, he’d probably wind up with a severe case — due to his lung condition. But that still doesn’t deter the snowbird who said he’ll take his chances so that he can enjoy a warm and active winter.