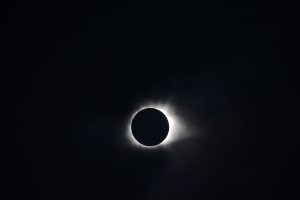 The solar eclipse on Aug. 21 was a major windfall for campgrounds all across the 14 state “Path of Totality”.

Some campgrounds, like Fort Caspar Campground in Casper, Wyo., had been booked solid since January 2015 for the event. Others had been preparing to greet an influx of eager eclipse-viewers for months, as the event provided the perfect opportunity for parties, music venues and other festivities.

“Everything went really well,” said Coqueugnoit. “I was expecting to have a few snags, but I was pleasantly surprised. We had a comfortable number of people attend the watch party and people seemed to take advantage of the food trucks on site.”

In Nashville, Tenn., Jellystone Park Manager Janet Stowers said the day’s events were well orchestrated, particularly for the children, including a “sky-gazer” class before the eclipse offering safety information for the kids.

“It’s been crazy and we’re still super busy, but everything went great,” she said the day after the eclipse.  “Any time you implement food with any activity the kids learn well,”

Earlier in the day children made crafts for a time capsule that will remain buried until the next eclipse in 2024.

With many campgrounds, RV resorts and hotels operating at full capacity, people traveling to see the full eclipse on a whim were forced to find alternatives. Cristina Bueno travelled from Chicago, Ill. to Hillsboro, Miss., to witness the eclipse, only to find all the area campgrounds packed.

“My friend lives in the area so we ended up camping on their property out in the country,” explained Bueno. “At first you could barely tell the moon was in front of the sun, but by the time the moon was covering it halfway we could see little crescent shadows all over everything.”

Surrounded by fewer people and away from the crowds they picked up on other subtle changes as well.

“It felt like nighttime and the cicadas seemed to get louder, like they typically do at night,” said Bueno.

Jamie Hale, of the Oregonian, projected a more quiet, serene experience from Timothy Lake, a location with a view of Mount Hood just 50 miles southeast of Portland, Ore., in the northern part of the “Path of Totality”.

“When I arrived at Gone Creek Campground, I expected to find other eclipse watchers, like myself, who had booked sites six months in advance.” he said, “What I found instead was a scene of both total normalcy and eerie quiet.

But he said in nearby Madras, considered a prime spot for viewing, people were crammed into makeshift campgrounds on farms, at the county fairgrounds and at the local airport. Farther east in Prineville, thousands converged on the Symbiosis festival, while similar scenes played out at events across Oregon.