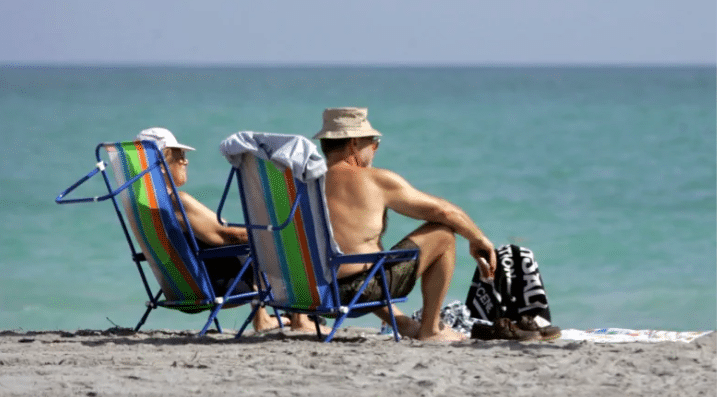 Despite the ongoing COVID-19 pandemic, some Canadian snowbirds still plan to head to the U.S. this winter. (Marsha Halper/The Miami Herald/The Associated Press)

Despite the U.S. having the world’s highest number of COVID-19 cases, Canadian snowbird Elizabeth Evans is determined to head south next month. That’s because her only winter home is parked at an RV resort in Williston, Fla., according to the CBC.

“I don’t have a [winter] home here,” said Evans, who’s currently living in her summer trailer at a campground in Niagara Falls. “I don’t have any winter clothes.”

Evans is one of a number of snowbirds set on going to the U.S. this winter, despite the ongoing pandemic. But getting there may not be easy: To help stop the spread of COVID-19, the Canada-U.S. land border remains closed to non-essential traffic until at least Oct. 21.

Evans believes the closure will be extended, so she plans to fly to Florida on Oct. 30 — two days before the campground where she’s living closes for the season.

The Canadian Snowbird Association — which has more than 110,000 members — said it’s hard to gauge at this point what percentage of its members will actually head south this winter.

Some snowbirds have already nixed their plans, while others are undecided.

“A significant portion of them are in a holding pattern, just to see what shakes out at the land border,” said spokesperson Evan Rachkovsky.

Some experts predict the Canada-U.S. land border could stay closed to non-essential travel until the new year.

Although Canadians can still fly to the U.S., Rachkovsky said many snowbirds won’t go without their cars but can’t afford the big fees — between $1,500 and $6,000 — to ship their vehicles.

“It’s not really an option for some of them to fly.”

Evans is one of those who would typically drive down to the U.S., which allowed her to transport her household supplies in her truck. She said she can’t ship her truck packed with luggage, so this year she’s leaving it behind, along with many household necessities.

But she’s still bent on going to the U.S., even as health experts warn of a possible surge of COVID-19 cases in the fall.

Evans said she plans to take precautionary measures such as social distancing and keep to her RV resort.

“I will take the risk because I know how to protect myself, and everybody — at least in my resort — follows the rules,” she said. “I’m more concerned about falling off my bicycle than I am of COVID.”

Travel insurance broker Martin Firestone said so far less than 10% of his snowbird clients have made firm plans to go south this winter. He said those who are going say they will aim to avoid crowds, just as they would in Canada during the pandemic.

“They’re going to be prisoners in their developments or their condos,” said Firestone, with Travel Secure in Toronto. “They’re saying, ‘I guess I’d rather sit down in Florida than sit here in Ontario and face the harsh climate.'”

That about sums up Perry Cohen’s itinerary. The snowbird — who is one of Firestone’s clients — aims to head to his condo in Deerfield Beach, Fla., in early December as long as the COVID-19 case count remains low in that area.

Cohen, who lives in Toronto, said he plans to take the necessary precautions and stick to his gated community — all while enjoying the warm weather.

“Why would I want to be cooped up here when I can be there, out in the sunshine, in the fresh air?” he said. “You have more positives to go than to stay here.”

Cohen also plans to fly to Florida and has a car parked at his condo. He said an added reassurance for him is that he can now purchase COVID-19 medical insurance — just in case he or his wife did get the virus.

“I like a complete package to know I’m looked after [if], God forbid, I have a problem.”

Firestone said that even with the coverage, snowbirds could face problems if the community where they’re living has an outbreak.