Some 'Grand Thinking' at the Grand Canyon

Nearly 150 leaders of the American national park community gathered at the North Rim of the Grand Canyon in Grand Canyon National Park for a five-day discussion of opportunities and concerns.

The meeting, Grand Thoughts at the Grand Canyon, was organized by the National Park Hospitality Association (NPHA) in cooperation with Grand Canyon National Park. Participants included executives of companies operating in the national parks, providing overnight accommodations, meals and more to an estimated 100 million park visitors annually, according to a news release.

The meeting also attracted key leaders from the telecommunications and entertainment industries and national tourism leaders, including state tourism directors. Grand Thoughts was held at the Grand Canyon Lodge, a structure built in 1928 that continues today to provide an inspiring perspective on America’s natural beauty.

Copies of key presentations and biographic information on more than 30 presenters are available at www.parkpartners.org. Video highlights of Grand Thoughts will be added to the website soon. For a schedule, program and list of participants click here. 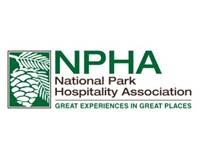 Tom Kiernan, president of NPCA, described unity among the parks community and a focus on long-term communications and funding as essential to achieve a “Bending of the Curve.” He described the current situation facing parks on both funding and visitation as downward. “We are at a crossroads,” he told the group, “but through unified action we can ‘Bend the Curve.’”

The program featured nearly a dozen keynote presentations and special panels. Leading off the program was Brent Young, founder and creative director for Studio 78, a top creator of theme park attractions and innovative film concepts globally. He touted the use of “Augmented Reality” as a part of park visits. Among his suggestions was using geospatial information to share what has occurred at the same spot at which visitors stand today – from battlefields to scenic overlooks. He told the group that a walk with a holographic ranger was technically feasible even today, and that leisure-time forces like theme parks and the film industry are investing heavily in technology that is then available to museums and parks at a greatly reduced cost. 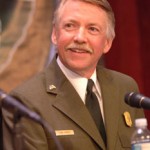 The leadership of the NPS played an active role in all of the discussions at the North Rim, and Director Jon Jarvis delivered a powerful message about the unifying role of national parks and the display of American values reflected in the system’s nearly 400 units.

Labeling his presentation “The Field Guide to American Values in the National Parks,” the director highlighted the broad relevance of parks. He added that for nearly 100 years the National Park Service has been pursuing a mission of promoting and protecting parks. He rated the job on the protection side as “good.” In contrast, he put the job on the promotion side as largely unaddressed and key to the success of the agency over its next century.

A major focus of discussion was the telling of stories – interpretation and education – both during visits to national park units and “virtually.” In addition to an innovative new policy and strategy outlined by NPS Associate Director Julia Washburn that relies on cooperation and partnerships, participants heard from and interacted with other park-related story tellers from the museum and American Indian communities.

New strategies to boost the financial and manpower resources available in national parks were another key topic of discussion. Participants learned about successes in related fields – including the rebuilding of Chicago’s lakeshore through a public/private partnership – and discussed new ideas ranging from a Penny for Parks proposal, which is connected with pending discussions regarding national surface transportation policy, to issues that could be addressed in conjunction with reauthorization of federal recreation fees, necessary by December 2014.

Verizon Wireless and satellite Internet providers shared ideas for increasing, managing and utilizing improved cell and internet connectivity in parks – and offered a serendipity. They reminded park interests that they can be powerful allies in reaching the Americans who don’t come to our national parks – because they are existing customers of these firms.

After outlining the opportunities associated with better connectivity in parks, NPS Deputy Director Peggy O’Dell challenged concessioners to identify five national parks where new technologies and strategies can be jointly tested by NPS and concessioners as national pilots.

Both NPS Director Jarvis and NPF President Neil Mulholland referenced the 2016 Centennial of the National Park Service as an opportunity to unify the park community and to share information about the importance of the national parks across America and the world. They expressed their excitement about a brand new initiative to engage a world class agency in this effort – the Grey Group. During 2013, Grey will undertake key research on public awareness of and attitude towards parks and begin the process of developing creative materials which can be used by the park family in a coordinated way. Mulholland outlined the importance of fully engaging the park community in the effort and discussed key opportunities in the initial research and creative design phases.

Special reports will be issued on key Grand Thoughts panels and presentations, including a remarkable panel featuring five youth working in and around Grand Canyon National Park and a discussion of the often-controversial issue of spirituality and the national parks.

About the National Park Hospitality Association

The National Park Hospitality Association (NPHA) is the national trade association of the businesses that provide lodging, food services, gifts and souvenirs, equipment rentals, transportation and other visitor services in the National Park System. Concessioners have served park visitors since the 1870s. NPHA members have a combined workforce of nearly 25,000 persons – mostly front-line, visitor-contact jobs – and provide in excess of $1.1 billion in goods and services to visitors annually. NPHA members operate in more than 100 park units and generate more than $100 million annually for the National Park Service budget. Guest Donation Programs operated by concessioners have provided millions of dollars for park projects and programs. www.parkpartners.org.