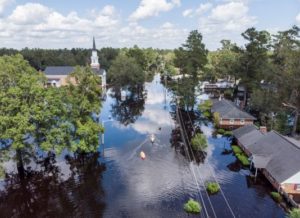 Kayaks paddle up Long Avenue past flooded sections of the Sherwood Drive community of Conway, S.C., on Sept. 23, as homes were submerged deeper than ever in floodwaters that have already set historic records.

On the weather maps, the last trace of Hurricane Florence disappeared more than a week ago. But the South Carolina port city of Georgetown, where five rivers flow into the sea, is bracing for the worst of its aftermath Wednesday (Sept. 26) and preparing for floodwaters in downtown areas, according to USA Today.

The Colonial-era seaport town of 9,000 is particularly vulnerable at the junction where waters from the Intracoastal Waterway and the Black, Great Pee Dee, Waccamaw and Sampit rivers pour into the sea. So much water is flowing downriver that it is backing up other rivers that are not even flooding and could split the county nearly in two.

The latest forecast, however, offered a glimmer of hope. Georgetown County officials said the river flow had slowed and the worst of the flooding is now expected to come on Friday and likely will be in the 2- to 4-foot range, instead of 10.

“That is still above Hurricane Matthew levels, and is very significant and can do a lot of damage. But it’s definitely an improvement on previous expectations,” county officials said on Twitter. On Friday, the Macammay surpassed the previous record high of 17.9 feet set in 2016 by Matthew.

Officials cautioned, however, that forecasts could shift again and return to the original 10-foot levels.