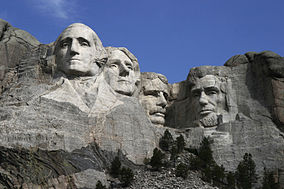 Boosted by a gradually and steadily improving economy, the summer tourism season in South Dakota showed strong increases from 2011, not only in the Black Hills, but across the state, the Sioux City (Iowa) Journal reported.

Ashley Worth, marketing and research analyst for the South Dakota Department of Tourism, said that throughout the state, visitation at private attractions are up anywhere from 8 percent to 25 percent.

“We’ve seen a great flow of visitors this summer,” Worth said. “We saw large increases in the number of visitors to the various state and national parks. Things began leveling off in July to the numbers we saw last year but visitation is still up over year-to-date.”

“Those figures are up 8 percent over the prior year through July.” Worth said. “Mount Rushmore alone has experienced more than 1.3 million visitors year-to-date, an increase of 8 percent through July.”

Year-to-date, more than 4.6 million visitors have visited South Dakota’s state parks, an increase of 24.7 percent from 2011 through July.

“For example, more than 1 million visitors have frequented Custer State Park year to date,” Worth said. “Those figures alone are up 8 percent through July.”

Worth added that information requests for the state are up 10.3 percent through July, with nearly 100,000 vacation guide requests fulfilled.

“National parks numbers are provided by the National Park Service, state parks figures by South Dakota Game, Fish and Parks and information requests are tracked by the South Dakota Department of Tourism,” she said.

Hotel demand, one other strong economic indicator of tourism success, also had strong showings across the state through July.

Hotel demand for South Dakota is up 7.5 percent over the prior year, through July, which amounts to approximately 2.7 million room nights.

Hotel Demand for the Black Hills Badlands & Lakes Region is up 9.5 percent, through July.

Deadwood Chamber of Commerce executive director George Milos said the positive swing in the numbers can be felt city-wide.

“The numbers are very encouraging thus far this year,” Milos said. “Our indicators are inquiries, web traffic, taxable sales, room sales and gaming numbers, all of which are up so far in 2012. Barring any huge spikes in gas prices or major events with the economy this could be one of the better summers we’ve had in several years. Although we can’t be 100 percent accurate we believe approximately 1.5 million people pass through Deadwood each year and a good 60 percent of those numbers are June through September.”