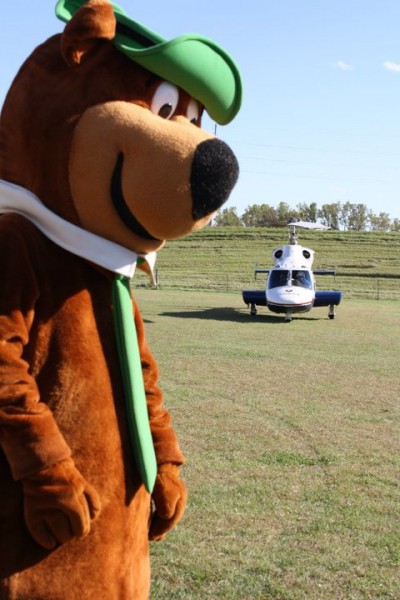 Yogi greets a helicopter at the Jellystone Park in Sioux Falls, S.D.

When gas prices go up, business at Yogi Bear’s Jellystone Park Camp-Resort in Sioux Falls, S.D., actually does too.

“We always tend to do better when gas prices get high,” said owner Bruce Aljets, whose family has owned the campground east of Sioux Falls for 22 years.

“We’ve never really had a down year, but we seem to do better when people stay close to home.”

The campground is booked full for Memorial Day weekend, and Aljets estimates business this year already is up 10 percent, the Sioux Falls Business Journal reported.

“We plan on a really good year,” he said.

“Everyone was literally up double digits this winter, not only with visitation to sites and attractions, but hotel occupancy was up in every region,” said Jim Hagen, secretary of the South Dakota Department of Tourism. “So we are really entering the peak season with a great tailwind behind us.”

Hagen said he expects travelers won’t be deterred by gas prices that are higher than last year, and recent surveys by the state backed him up.

So far this year, visitor numbers in Sioux Falls are strong. More than 10,000 people came through the visitor center at Falls Park through March, nearly double the visitors during the same time in 2011.

“It’s, of course, too early to know how the whole the season will go,” Schmidt said. “We don’t know how high gas prices are going to go, but as of right now people are still planning to travel. Our visitor (information) request numbers are very strong.”