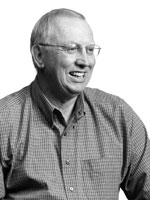 Duane Spader, owner/operator of the Sioux Falls, S.D., KOA Campground, was honored for 40 years of service to the KOA system during the annual KOA International Convention on Friday (Nov. 16) at the Gaylord Palms Resort in Orlando, Fla.

“Duane got involved in our industry because he moved his recreational vehicle dealership from Brookings, S.D., to Sioux Falls to a location that had a campground next to it,” recalled KOA President Pat Hittmeier. Spader soon converted the park to be a KOA.

Hittmeier said Spader was instrumental in leading the KOA system to adopt a “20-group” system that encouraged franchisees to share operational best practices and advanced many programs quickly throughout the KOA system.

“Today, Spader 20 Groups are involved in 10 different industries,” Hittmeier said. “Duane was also a leader in making improvements. He basically worked with KOA in the 1970s to modify more than two-thirds of the park, bringing in more than 30,000 cubic feet of dirt to get it right.”