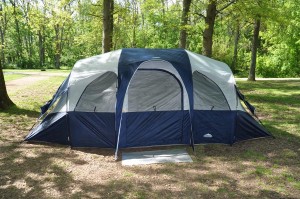 Whitewater Memorial State Park in Liberty, Ind., is one of the state’s oldest parks, but you would not know that by spending a night in the park’s campground. With electric hookup, large camp sites for big RV’s and campers, and modern shower houses, it is and ideal location for an inexpensive family vacation or to just get away for the night. Photo courtesy of America’s State Parks website

Gas prices are down this year and the weather looks to be mostly dry, which could make the upcoming Labor Day weekend a good one for tourists and the businesses that depend upon them, the Richmond, Ind., Palladium-Item reported.

Pump prices have continued to drop since he arrived in Richmond on Monday (Aug. 26) and there also were lots of travelers on the highways this year, he said.

“It’s about 600 miles to get here, and we saw a lot of traffic, more than normal,” Swenson said. “When we went past the Wisconsin Dells, where they have all the water parks, it was packed. There are people taking vacations.”

Larry Rector of Selma, Ind., would love to spend Labor Day weekend at Whitewater Memorial State Park. Rector and his wife, Sharon, are camping there this week, but the campground already is fully booked for the holiday.

“We like it because it’s quiet and there’s lots of shade,” Larry Rector said of Whitewater. “The hiking trails are great and so is the beach. We looked for reservations at other state parks and they were all booked, too.”

Indiana’s state-owned campgrounds are expected to be 99.5% full for the Labor Day weekend, based on mid-week reservations, said Christie Wilmoth, business services program manager for the Indiana Department of Natural Resources (DNR).

“Typically, we fill up on Labor Day. Even with the forecast of heat this weekend, we’re staying pretty full,” Wilmoth said. “It’s rain that causes campers to cancel.”

Even though gas prices are down, camping is still a less-expensive vacation option, Rector said, which might account for its popularity.

“It’s cheaper to camp than to drive around the country,” Rector said.

“Gas prices make people stay home. If you’ve got a family with two or three kids, it costs a fortune just to eat out, let alone take a trip,” Swenson said. “When you put the miles on for a trip, gas prices make a big difference.”

That’s one of the reasons AAA Travel predicts more than 34.1 million people, 1.4 million more than last year, will travel more than 50 miles from home this weekend.

If those numbers are valid, Labor Day 2013 would have the highest travel level since a record 45.1 million people traveled by car on Labor Day in 2008, the year the recession hit, AAA said in a statement.

The DNR is expecting Labor Day weekend to be a better holiday than it was a year ago, Wilmoth said.

The 2012 drought, which resulted in burning bans in many communities, impacted Labor Day weekend attendance, Wilmoth said. Occupancy at state campgrounds was only 72% during Labor Day weekend in 2012, she said.

With schools now starting as early as the first week in August, state recreation facilities do see attendance drop in August, but it doesn’t seem to affect Labor Day, Wilmoth said.

“They still come and fill up the campgrounds on Labor Day weekend,” Wilmoth said. “October is also a big month. There are a lot of fall festivals on the properties, and people want to be outdoors while they can.”