Statue of Liberty to Remain Closed for Rehab 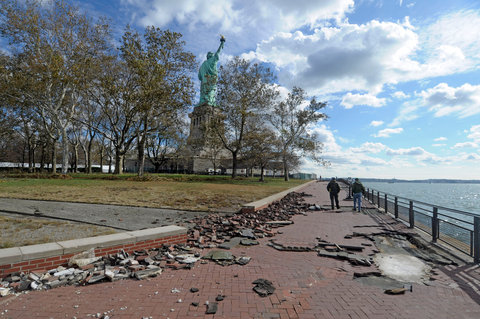 More than half of the brick pavers from the promenade around Liberty Island were dislodged by the storm surge from Hurricane Sandy. Photo courtesy of Kevin Daley, National Park Service

Hurricane Sandy did no real harm to the Statue of Liberty but caused “significant damage” to the infrastructure of Liberty Island and Ellis Island, which will leave them closed to tourists indefinitely, a spokesman for the National Park Service (NPS) said on Thursday.

Most notably, the dock at Liberty Island that receives the large ferries filled with tourists arriving from Battery Park in Manhattan and Liberty State Park in New Jersey may need to be rebuilt. Statue Cruises, the company that operates the ferries, said it had stopped selling tickets to visit the islands and did not know when its service would resume, the New York Times reported.

The storm hit just a day after the interior of the statue was reopened after a yearlong renovation. On Oct. 28, Ken Salazar, the secretary of the interior, visited the statue as the storm was roaring up the East Coast. The NPS had hoped to allow tourists into the statue again by Nov. 1, but the damage to the islands was much more severe than expected.

Mike Litterst, a spokesman for the “incident management team” that the Park Service has assembled in New York City, said the statue, its pedestal and its base received “little or no damage.” But, he added, none of the mechanical systems, including electricity, on Liberty Island were functioning after the basement of the building that houses a cafe and gift shop flooded.

The basement of the museum building on Ellis Island filled with several feet or water, which ruined mechanical equipment but did not harm any of the museum’s archives or artifacts, Litterst said.

The security screening apparatus housed in a large tent on the Battery Park waterfront was also “significantly damaged,” he said. A water line on the side of the tent indicated the tide had risen to about the level of the conveyor belts on the magnetometers inside the tent.

Tourists with tickets to visit the statue and Ellis Island have been showing up there only to be disappointed to find that the islands are closed off.

Nearby, Statue Cruises was loading dozens of tourists onto boats for cruises around the harbor that would take them as close to the statue as the Park Service would allow. Normally, the ferries take about 7,500 passengers to the islands each day at this time of year.

The team is helping to clean up all of the national park sites in and around New York City, almost all of which remain have closed since the storm, Litterst said. He said that Federal Hall on Wall Street lacked power and that a marina in Gateway National Recreation Area sustained a lot of damage. At Sandy Hook in New Jersey, floodwater seeped into all of the buildings, and the roads need to be cleared of sand and debris.

The only national park site in the area that has reopened is St. Paul’s Church,  Litterst said. Four others — Federal Hall, the African Burial Ground, Grant’s Tomb and the Theodore Roosevelt Birthplace – could reopen as soon as Saturday.

He had no estimate of when the Statue of Liberty’s torch, which went dark when Hurricane Sandy struck, would again serve as a beacon in New York Harbor.