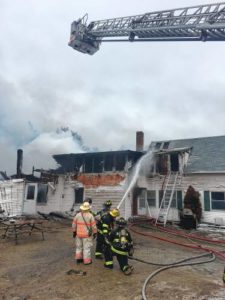 The two structures stood at the entrance to the 48-acre Lazy River Campground on Goboro Road in Epsom, N.H., where the barn served as the recreation center, according to the Concord Monitor.

“May 15 will be 21 years,” he said, sitting in a gray sedan to get out of the rain as firefighters cleared the still-smoldering scene.

The white-clapboard home Smith and his family lived in remained mostly standing, but was rendered completely uninhabitable. The blaze reduced the barn to blackened rubble.

Smith, who called in the fire at 7:16 a.m., said it started with a woodstove in the home.

Nobody was injured in the fire, Smith said and pets were also evacuated in time.