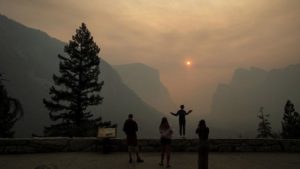 Hannah Whyatt poses for a friend’s photo as smoke from the Ferguson fire fills Yosemite Valley.

This summer’s relentless California wildfires have claimed at least a dozen lives and destroyed more than 1,200 homes. But along with the loss of life and property, the blazes have also taken a tremendous toll on taxpayers and the state’s huge tourism industry, according to the Los Angeles Times.

In less than two months, California has nearly wiped out the emergency wildfire funds set aside for the entire fiscal year, spending about $405 million out of the nearly $443 million allocated.

“We haven’t had a break,” said Scott McLean, a spokesman for the California Department of Forestry and Fire Protection. “One fire is coming close to the end and another one starts right up. It’s been a revolving door for our firefighters … and it’s definitely going to get into the funds.”

The financial hit comes well before what’s supposed to be peak fire season, which means California will probably need to once again dip into its overall budget reserve, which is about $2 billion. The state has done so for seven of the last 10 years, said H.D. Palmer of the Department of Finance.

The deadly Carr fire — which ripped through almost 230,000 acres and destroyed more than 1,000 homes — cost a total of $152 million alone in firefighting costs, McLean said. He did not yet have totals for the Mendocino Complex, which consists of two blazes whose combined acreage make up the largest fire in California history.

On the tourism front, a recent study found that 11% of would-be travelers to California said the fires have prompted them to cancel their trips, costing the industry as much as $20 million last month, said Caroline Beteta, head of Visit California, the nonprofit marketing agency for the state.