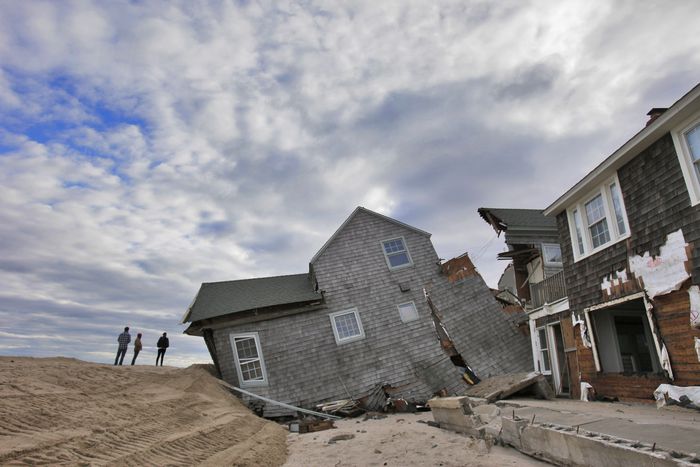 People walk past a house that collapsed after being compromised by Hurricane Sandy on the beach in Bay Head on Nov. 3, 2012.

Tuesday (Oct. 29) marked seven years since Hurricane Sandy made its unprecedented landfall in New Jersey, according to NJ.com.

The devastating effects are well documented: 39 people dead and more than $30 billion in damage. Unprecedented flooding throughout the state. Millions of people without power for days. Major roadways rendered impassable for even longer.

And climate change likely made it all worse.

Since 1980, the threat posed to New Jersey by hurricanes and general flooding has risen dramatically thanks to climate change, according to a report released Tuesday. Ever-rising seas and warming ocean temperatures are fueling the growing risk — especially in the Garden State, where sinking land means that the water here climbs twice as fast as the global average.

It’s been an expensive shift. Hurricane-related winds and floods have caused up to $1.3 billion more in destruction in the state today than they would have if climate reported in the 1980s had remained constant, according to the report.

As long as greenhouse gas emissions continue to drive further climate change, the report expects the danger to grow.

The report, called “New Jersey’s Rising Coastal Risk,” was produced by the independent research provider Rhodium Group with partner scientists from Rutgers University, the University of California and the University of Chicago. First Street Foundation, a nonprofit group that researches flood risk, also contributed to the report.

Around the world, oceans rise as steadily hotter temperatures melt more of the polar ice caps.

The creeping water is warmer than ever, particularly off the Jersey Shore. Sea surface temperature off the Northeast has heated faster than 99% of the global ocean since 2004, according to the report.

Hurricanes feed on warm water, so the hotter temperatures are likely to bring more storms north toward New Jersey. And, as the report makes clear, “higher sea levels mean more flooding during any given storm.”

Higher water and more frequent, intense hurricanes have combined to put thousands more buildings at risk of storm damage in the past four decades.

“There’s already a significant number of properties that are exposed to tidal flooding as a result of sea level rise,” said Bob Kopp, a Rutgers sea-level rise expert and co-author of the report.