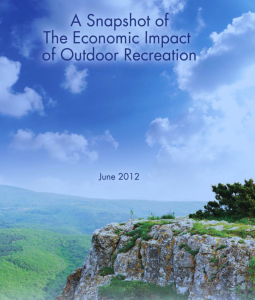 The report, “A Snapshot of the Economic Impact of Outdoor Recreation,” marks the first time the non-motorized and motorized recreation industries have joined forces to provide a complete picture of the economic impact and importance of outdoor recreation for the economy, according to WGA.

It calls the outdoor recreation industry “an overlooked economic giant,” reflecting Americans spent an estimated $645.6 billion on outdoor recreation in 2011, third only to spending in financial services and insurance, and outpatient health care. It exceeds by nearly $300 billion, spending in economic sectors of gasoline and fuels ($354 billion), motor vehicles and parts ($340 billion), pharmaceuticals ($331 billion) and household utilities ($309 billion).

The report states that outdoor recreation spending in Western states equaled $255.6 billion in 2011, which is nearly 40 percent of the national total and fueled 2.3 million jobs in the Western region in 2011.

Tax revenues generated in 2011 through the outdoor recreation sector for the Western states were estimated at $15.41 billion in federal tax receipts and $15.38 billion in state and local tax receipts.

The report promises a commitment from the WGA and its industry partners to develop state-level reports in these areas.

The association represents 19 states and three U.S. flag territories in the Pacific.