Study: Prepare For Battery Of Storms In 2018 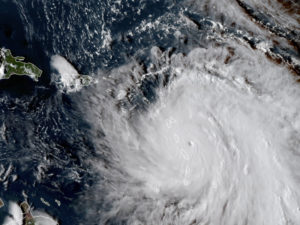 While images of destruction caused by last year’s battery of hurricanes are still fresh in the minds of many Americans, including those living on Puerto Rico where after six months power is not fully restored, forecasters are cautioning the public to brace themselves for another busy hurricane season, according to NPR.

The Atlantic Hurricane season runs from June 1 through the end of November.

“Coastal residents are reminded that it only takes one hurricane making landfall to make it an active season for them, and they need to prepare the same for every season, regardless of how much activity is predicted,” researchers say.

By comparison, 2017 had a total of 17 named storms — with 10 becoming hurricanes and six of them major hurricanes — including Hurricanes Harvey, Irma and Maria, which ravaged Texas, Florida, and Puerto Rico. But that number exceeded forecasters’ expectations, including the team from CSU. The university had only anticipated 11 tropical storms with four becoming hurricanes.

Before Harvey made landfall it was predicted as merely a tropical storm or Category 1 hurricane with wind speeds up to 85 mph. But within a few days and by the time it hit the ground near Corpus Christi, Texas, it had developed into a Category 4 with 132 mph winds.

“We issue these forecasts to satisfy the curiosity of the general public and to bring attention to the hurricane problem,” the university said. “There is a general interest in knowing what the odds are for an active or inactive season.”