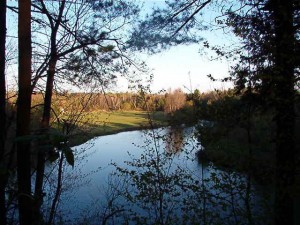 Pine Ridge Park Campsite near Constable, N.Y., owned by Brad and Nancy Fletcher, was one of two sites along the lower Salmon River used by the St. Regis Mohawk tribe and the U.S. Fish & Wildlife Service to release prehistoric Lake Sturgeon fingerlings into the wild.

On Nov. 6, the Tribal Environment Division along with the U.S. Fish and Wildlife Service released 900 lake sturgeon fingerlings into the lower Salmon River. They released the roughly seven-inch, five-month-old fish at two sites, one across the highway from Riverbend Dairy on state Route 37 in Fort Covington and the other at the Fletchers’ campground on state Route 122 in Constable, the Malone Telegram reported.

At the Pine Ridge Park release, students from the Akwesasne Freedom School got a hands-on lesson about the fish and the project. The Freedom School is a Mohawk language-immersion school for elementary-aged children.

Sturgeon, according to U.S. Geological Survey (USGS) research ecologist Dawn Dittman, are estimated to have a current population of less than 1% of their historical numbers. She said their slow growth to spawning maturity makes it difficult for their numbers to increase naturally.

“Natural increases take forever, essentially,” Dittman said. Literature provided by the Fish and Wildlife Service says female sturgeon generally reproduce for the first time between ages 24 and 26, males between ages eight and 12. It says females spawn once every four to nine years; males once every two to seven years. The pamphlet says the females can live up to 150 years, while males typically live 50 to 60 years.

Barbara Tarbell, lake sturgeon restoration project manager, said their shrinking population can be attributed to a number of factors, including overfishing and habitat changes brought about by the construction of dams.

She said the fish released last week will mature in the shallow waters of the Salmon River and as they get older will migrate to the St. Lawrence River, where they will seek deep water until they reach spawning age.

“The goal is for them to come back here and spawn in 20 or so years,” she said. “This is the perfect habitat for them as they’re growing.”

The Tribal Environment Division harvested the eggs in early June and sent them to a fish hatchery in Genoa, Wis. They were trucked back and then released.